My academic (and personal) interests in (non)motherhood and grief has always been intertwined. As I have written before it was a personal experience of loss – a miscarriage – that brought me to sociology, to academia, and I believe that sociology has affected the way I do grief:
https://www.tandfonline.com/doi/abs/10.1080/13576275.2014.989494?journalCode=cmrt20
I have written too about how for many, including me, identities are complex, not static and precarious, not certain:
https://www.abctales.com/story/gletherby/reflections-mother%E2%80%99s-day-motherless-childless-woman

Having spent more than 30 years researching and writing about motherhood/mothering, (non)motherhood/mothering and other motherhood/ing (i.e. motherhood/ing that does not take place in socially expected and accepted circumstances) I find myself drawn to cultural representations of these identities and experiences (I’ve written about this too e.g.: http://arwenackcerebrals.blogspot.com/2017/07/sex-gender-and-all-rest-hidden_30.html)

Recently, a close friend gave me a copy of The Light Between Oceans by L. M. Stedman. Published by Black Swan in 2013 the book is Stedman’s debut novel. Here is an overview (not really a spoiler) curtesy of ‘Good Reads’: 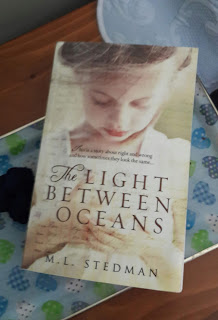 A captivating, beautiful, and stunningly accomplished debut novel that opens in 1918 Australia - the story of a lighthouse keeper and his wife who make one devastating choice that forever changes two worlds.

Australia, 1926. After four harrowing years fighting on the Western Front, Tom Sherbourne returns home to take a job as the lighthouse keeper on Janus Rock, nearly half a day's journey from the coast. To this isolated island, where the supply boat comes once a season and shore leaves are granted every other year at best, Tom brings a young, bold, and loving wife, Isabel. Years later, after two miscarriages and one stillbirth, the grieving Isabel hears a baby's cries on the wind. A boat has washed up onshore carrying a dead man and a living baby.

Tom, whose records as a lighthouse keeper are meticulous and whose moral principles have withstood a horrific war, wants to report the man and infant immediately. But Isabel has taken the tiny baby to her breast. Against Tom's judgment, they claim her as their own and name her Lucy. When she is two, Tom and Isabel return to the mainland and are reminded that there are other people in the world. Their choice has devastated one of them. . . https://www.goodreads.com/book/show/13158800-the-light-between-oceans

Looking at readers’ reviews online it seems folk either love or hate the book. For me, although there was some slippage into stereotypes, the attention given to the different ways to be a mother and the different types of mother loss was rare for a novel. Issues covered include (but are not restricted to):

Violet had seen her daughter three years before, still grieving at her second miscarriage, on the couple's first shore leave. Then Isabel had sat with her head on her mother's lap weeping.

'It's just nature's way,' Violet had said. 'You have to take a breadth, and get up again. Children will come along, if that's what God wants for you: just be patient. ....

She did not tell Isabel the whole truth of it, though. She did not say how often she had seen a child carried to term ... Only to be lost to scarlet fever or diphtheria, their clothes folded away neatly until they might fit the next one down. Nor did she touch on the awkwardness of replying to a causal enquiries as to the number of children one had. (p166)

Child death is less common than it was (until recently it was very common for parents to bury many of their children) although now as previously, perinatal loss or the death of a child often causes profound grief, yet society often minimises/ignores the loss and associated grief (e.g. Letherby 1993, Frost et al 2007). A common response is 'never mind, better luck next time' or even 'well, it's all for the best' if the mother or the baby are seen as less than 'perfect' in any way. Arguably, formal support following the loss of an infant has improved immensely in the late 20th Century not least in terms of the griefwork in which professionals participate (Davidson 2008).

Coming back last time to the house she grew up in, Isabel had been reminded of the darkness that had descended with her brothers' deaths, how loss had leaked all over her mother's life like a stain. As a fourteen-year-old, Isabel had searched the dictionary, she knew that if a wife lost a husband, there was a whole new word to describe who she was: she was now a widow. A husband became a widower. But if a parent lost as child, there was no special label for their grief. They were still just a mother or a father, even if they no longer had a son or daughter. That seemed odd. As to her own status, she wondered whether she was still technically a sister, now that her adored brothers had died. (p171)

Additionally, of course, there are no ways to describe a person who does not have children other than with reference to what is ‘missing’ from their lives: childless, childfree, non(not)mother/father. . .

The different ways to be a mother

Septimus was the seventh and last child of a Bermondsey iron monger who had waited only three days after the baby's birth before departing this world under the hives of a runaway horse. His mother had done her best to keep the family together, but after a few years, as consumption burrowed away at her, she knew she had to secure her children's future. She dispatched as many of them as she could to relatives around and about London, where they could be free help to the people who took, them in. But her last orb was too young to be anything but a drain on scarce resources, and one of his mother's last acts was to secure passage to Western Australia for him, alone. (p198)

This reminds me of the book Empty Cradles (Oranges and Sunshine) written by Margaret Humphreys, published in 2011 by Corgi. The book focuses on social worker Humphrey's experience of attempting to get justice for thousands of children, many of them forcibly taken away from their parents, who were sent to Australia by the British government for a 'new and better' life. For many it was anything but:

Between the 1920s and the 1960s, Britain sent an estimated 10,000 children to Australia to help populate its former colony with "good white stock". The children were promised new lives in an exotic land of plenty; instead they suffered hunger, privation and abuse in government and religious institutions.
https://www.independent.co.uk/news/world/australasia/australias-apology-to-transported-children-1779652.html

In The Light Between Oceans there is also (and this is the main focus of the book) much consideration of the differences and similarities between biological and social motherhood (and mothering). I don’t want to give too much away so will leave you to read this for yourselves.

To end I include an extract from a Blog entry I wrote last year which highlights some of the problems with the classification of some types of motherhood and fatherhood as appropriate and others as not and further some choices and practices as normal and natural or not:

Defining some human conceptions as natural and particular births as normal means that others (often those enabled by low level or more significant technology of some sort) are considered unnatural and abnormal. Similarly, some ‘instincts’ to parent are considered natural, even inevitable, whilst others are not. Those who do not have the desire to mother or father may be considered to be denying and defying the natural individuals whereas those that parent outside of expected social, economic and sexual circumstances are viewed by some to be living in abnormal (or pretend) as opposed to real families (remember Section 28, Section 2A of the Local Government Act 1986 (England, Wales and Scotland) which stated that the ‘acceptability of homosexuality as a pretended family relationship’ should not be ‘promoted’ through the education system). And how many times have you read a newspaper or magazine article or watched a TV programme focusing on a man or women searching for their real mother and/or father? Social (adoptive, foster, step) parents, like all parents, may or may not parent well, but whatever their qualities or not, those that wash, clothe, feed, care for, socialise, 'bring up' children are just as real as those that provide gametes towards the creation of, or carry and give birth to them. Technological advances and social agreements concerning such things as sperm and egg donation and surrogacy add to the need to take care when describing the status - as normal or not, as real or not - of those that parent and those that do not.
http://arwenackcerebrals.blogspot.com/2017/01/extraordinarily-ordinary-or-ordinarily.html