#DontBuyTheSun, and while you’re at it …. | yet more reflections (sigh) on the mainstream media

Last month I travelled to Liverpool for the Labour Party Conference #Lab18. I was born in Liverpool and although I haven’t lived here for 50+ years its’ always great to spend time in the city. Prior to my trip I read some of the responses to the decision by Momentum to exclude ‘journalists’ from The Sun from attending The World Transformed Events #TWT18. A bit of detail for anyone who doesn’t know:

The pro-Corbyn Labour group said that journalists from the Sun are not welcome at The World Transformed, its fringe conference event coinciding with the main party conference

…. In a statement it said that the paper had ‘smeared’ victims of the Hillsborough stadium tragedy, in which 96 Liverpool fans died. And it said it was supporting a long-running boycott of the paper in the city. … In Liverpool there is a 29-year-long campaign to boycott the Sun after they smeared fans in the wake of the Hillsborough disaster, falsely claiming that they ‘picked pockets of victims’, urinated on brave cops’ and ‘beat up PCs giving the kiss of life’.

“The boycott is backed by community groups and businesses across the city, including many local taxi firms and Liverpool-based Tesco branches.” . . .
https://inews.co.uk/news/politics/momentum-bans-the-sun-from-world-transformed-festival/

And listen to this from Billy Bragg
https://uk.video.search.yahoo.com/search/video?fr=mcafee&p=Billy+Bragg+Don%27t+buy+the+Sun#id=1&vid=73d69abbb2fe689d1e2715ae2e1e7e88&action=click

Responding to the decision of #TWT18 on twitter Heather Stewart who writes for The Guardian, a paper that claims left credentials but, apart from the occasional piece, could hardly be called pro-Corbyn (see below), wrote:

Missing the point somewhat, me thinks....

I have written (a lot, on several occasions) about how problematic I think the mainstream media (MSM) is in terms of its political (defined in its broadest sense) reporting. I’m getting just a bit fed up with the topic if I’m honest… But, sadly the examples, and thus the need to write about them, continue. With reference to the conference season and beyond:

On the Friday before #Lab18 Krishnan Guru-Murthy of Channel 4 news tweeted the following:

To which the Labour Press Team responded.

Despite this Guru-Murthy’s tweet was not deleted or amended and no apology followed.

But it’s the likes and shares that count, right? So much more important than the truth.

On Saturday 22nd September the main Labour Party Conference (following the Saturday Women’s Conference) kicked off with an open air rally on the Pier Head (right next to the Royal Liver Buildings, one of which my maternal granddad left a wheelbarrow on top of whilst working as a builder in the 1940s, but that’s another story) Tom Peck published an article in The Independent with the following headline and sub-heading:

Labour rally: Jeremy Corbyn has lost his mojo and he doesn't have long to find it
The only thing that prevents Labour feeling like a cult is the sheer personal void around which that cult is built
Peck wrote:

… this year, on Saturday night at Pier Head in Liverpool, if the chap [Corbyn] that had shuffled on stage almost unnoticed in the rousing twilight, had carried on going twenty more paces and out into the Mersey, even the most undoubting of his disciples would not have been surprised to see him sink below the surface.
https://www.independent.co.uk/voices/labour-conference-2018-jeremy-corbyn-rally-liverpool-pier-head-a8550691.html

I was at the rally. The atmosphere was electric, the response to Corbyn’s speech more than enthusiastic, the whole evening energising.

Maybe Peck and I were at different events.

Three: A couple of conference reports


I attended Corbyn’s conference speech and I listened to most of May’s. The former packed with policies and hope, the latter (like many at #CPC18) full of attacks on Labour and the odd policy (generally a watered down version of a Labour one). So how did the media respond? A backward looking,scruffy old Marxist versus a 'Dancing Queen' (my feelings towards a long beloved Abba track tainted forevermore). 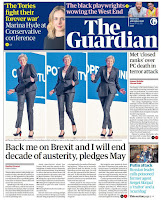 There were positive review's of #Lab18 and of the LOTO's speech. There were negative takes on @CPC18 and pieces unpicking the spin, and highlighting the hollowness, in the PMs speech. But to this observer, not least, these two images demonstrate the less than subtle way that Labour/Corbyn and the Conservatives/May are represented on a regular basis in the newspapers, on the radio and on our screens. 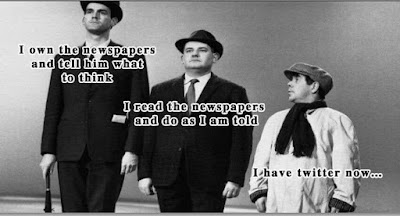 All in all I am SO glad for alternative sources.

****
As I have written previously I manage my own media intake by reading around an issue, including checking out blogs and alternative media. Via the internet (twitter is invaluable here) I listen, watch and read, rarely relying on live news programmes, never on in-my-hand versions of mainstream newspapers (only the occasional local one). I am distressed by what the BBC has become https://arwenackcerebrals.blogspot.com/2018/04/grieving-for-bbc-and-mainstream-media.html and so I know that, with reference to the next example, I only have myself to blame.

Four: Have I Got News (sic) For You

A couple of Friday evenings ago I was drifting in and out of a doze when in a moment of foolishness I decided to watch Have I Got News For You (something I haven’t done for a very long time. One of Alexander Armstrong’s (guest host) interjections focused on the recent report of a night out by a group of students from the University of Plymouth’s Conservative Association. The students were pictured with offensive, including anti-Semitic, slogans written on their t-shirts and their skin. In commenting on the report Armstrong stated that the students had been ‘expelled from the Conservative Party’ and ‘warmly welcomed into the Labour Party.’

The item reporting on a group of students from the University of Plymouth Conservative Association displaying anti-Semitic, and other offensive, comments on their t-shirts and skin was used as an opportunity to inaccurately smear and attack the Labour Party which as has been evidenced many times is committed to being an anti-racist party. Suggesting that Labour would welcome such people as members is offensive to the half a million plus UK Labour members. I appreciate that HIGNFY is a satirical comedy programme but this was not funny or clever and furthermore, cheap comedy such as this based on untruths makes it harder to fight antisemitism and other forms of racism within politics and outside of it.

The response included the following:

The BBC has a commitment to due impartiality. In this context, the term ‘due’ means that impartiality must be adequate and appropriate to the output, taking account of the subject and nature of the content and the likely audience expectation. For a topical and satirical entertainment show such as HIGNFY, the requirement for impartiality is different than it is for say, a news programme.

The BBC has a rich heritage of satire and, in this tradition, HIGNFY looks for humorous angles on stories that have been in that week’s news. . . . Satirical comedy shows can provoke differing reactions from the audience and as the BBC is a public service financed by the licence fee, it must provide programmes which cater for the whole range of tastes. We understand that by its very nature, comedy can be often polarising.

I understand that satire (irony, sarcasm, ridicule …) is fundamental to comedy.

I appreciate that what we find funny is subjective, ‘polarising’ even.

Yet, I stand by my comments that given the sensitivity and importance of the issue this item was neither funny nor clever.

But then again, after all, I AM a left leaning feminist so obviously I have no sense of humour!


Earlier this month I took part in a #BoycottTheGuardian twitter storm. I thought about this for a while before I got involved not least because I do admire some of the journalists who write for this outlet and there is some space provided for politicians and activists from the Left. But, but, given a) the plethora of pieces that have, and continue to, add to, rather than challenge, the ‘attack dog’ approach to reporting about the Labour leadership, Labour activists and Labour voters AND b) it’s contribution to the, it seems at least to me, almost hysterical attack from the MSM towards alternative, often more explicitly partisan outlets and reporters (most recently The Canary has been a particular focus here), I could not but join in.

This week Owen Jones (referring in part to The Telegraphs’ pro-Saudi reporting).

This is not the first time Jones has been critical of the mainstream media. He himself writes a blog and Opinion pieces for The Guardian. I enjoy many of his writings. I also admire him for his activism. Yet, I find his lack of critique for the newspaper he writes for more than frustrating ( see for example https://arwenackcerebrals.blogspot.com/2017/10/bias-truth-trust-what-media-can-learn.html ) and his views on ‘good’ and ‘not so good’ alternative outlets disturbing. This, plus the 'up-in-arms', 'shock horror', 'how dare they', response of many, to #BoycottTheGuardian, demonstrates I think why we need a constant, continued, comprehensive critique of ALL media outputs and outlets.

Like with the BBC there are many of us who, despite much evidence, continue to want to give The Guardian another chance, and another chance, and another chance…. Only to be disappointed yet again. This is complicated by the fact that whilst not wanting, ever, to rely only on the TV, radio, broadsheet or tabloid ‘news’ I do accept that in order to a) offer a challenge to information that is one-sided or just untrue, AND b) to appreciate what others are reading, and might be believing, it is important to know what it out there; to be able to properly critique we need to know what we are critiquing. So I will (despite my support for the aforementioned twitter storm) continue to get my news (and political education) from a variety of sources, some of which will, I am sure, continue to annoy and distress me. I am being hypocritical, I admit this. I also accept and acknowledge my own bias in this piece (as in others). I wish others would too.

With all this, and similar writings in mind, I will also, along with many others, continue to support, and work in any small way I can, for media reform #ChangeTheMedia

Posted by arwenackcerebrals at 09:38 No comments: