In addition to my writings here I also publish stories, poems and memoir on ABCtales https://www.abctales.com/user/gletherby Today I responded to this week’s ‘inspiration point’: ‘Prose or poetry (or both!) to include mention of three different months of the year and two songs.’ Spinning and Spanning is the result: 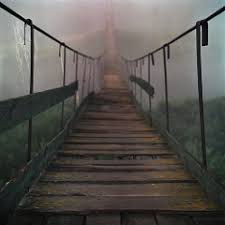 Checking the calendar I confirm the date. The 19th January, not April the 1st.

And yet it appears to be true.

A Foreign Secretary with a less than credible history when it comes to plans for the building of bridges. (His travel covered Garden Bridge not abandoned until £46 million of our money had already been spent),

This week suggests another.

Less of a Bridge Over Troubled Water we are told,

Rather a new ‘fixed link’ between the UK and France.

Perhaps not such a surprise on #NationalPopcornDay.

I appreciate the irony of my addition to the ‘debate’. (The scare quotes highlighting the comedic value of the discussion.)

Alongside royal wedding memorabilia (did you see those dolls?) and the loan of the Bayeux Tapestry in 2020, perhaps in October; the Battle of Hastings anniversary month,

It serves as distraction from NHS crises, corporate failings and failure, creeping privatisation and the shocking eugenic protestations from some in positions of power.

Not to mention the costs and mechanics of building a structure so complex and large,

And add to that the tunnel we already have.

My advice to the minister and to everyone else: Let it Go.
Posted by arwenackcerebrals at 04:56 1 comment:

The Way Things Have Always Been | Two related pieces...

Tradition, ritual, and custom.
The way things have always been.
As pertinent to Christmas gifts before OR after the turkey feast as to antiquated practices in law and at Westminster.
From the swearing allegiance to God and The Queen to the need to pronounce and declare through the Speaker of the House,
From the uproar directed at those without ties to the shameful, everyday sexism and racism that trips of far too many a political tongue.

Tradition, ritual, and custom.
The way things have always been.
As lauded in Britain in terms of ‘our heritage, our values’ as it is in the good ol’ U.S. of A. with presidential aims and claims to be ‘great again’.
Observe, here at home, the manifestation of visceral frets about losing our land of hope, and so-called glory,
All too evident in the verbal, virtual and physical bullish battles to ‘get our country back’. Quite from where, or from whom, nobody is able to say.

Tradition, ritual, and custom.
The way things have always been.
As significant to the personal as it is to the political (which of course are always entwined).
The references to boys’ and girls’ jobs by those who (should) know better, the continuing double standards pertaining to looks, dress, emotional display,
treatment of and responses from,
And the sorry, sad evidence of the still remaining fear; of love that some deem unnatural and at appeals for reproductive rights for all.

Traditional, ritual, and custom.
The way things have always been.
But, there is hope, with real signs of change and some delicious glimpses of more, and of more, and of more.
For increases in P/political self-education, engagement and activism are supported by networking, collaboration, community endeavour and at least some in the arenas of sport and entertainment keeping up with the times,
So alongside schoolboys in skirts protesting silly rules, and advertisers being called to address gender stereotyping, we have tennis’ World No 1 calming correcting casual sexism and a (13th) Doctor true to the spirit of regeneration.

AND YET,
See the hands thrown up in horror and the backlash to challenge and change. Some cite,
Tradition, ritual, and custom. And,
The way things have always been.

Still plenty to do then…

The Way Things Have Always Been, PART TWO (JANUARY 2018)

Tradition, ritual and custom.
The way things have always been, PART TWO. No doubt there will be more.
Despite the historical ‘pride’ the interpretation of what was, and so what should be, is often nothing more than damaged and damaging misunderstanding and misrepresentation.
From shout-outs, tweets and memes that reduce complex positions and arguments to ABSOLUTE positive or negative certainties,
From politicians who heckle rather than debate to others (and the same) who abstain so as not to lose face or possible favour,
Benches full of the privileged that put personal prejudice and Party gain before country thus ironically threatening democracy past present and future; the way things have always been.

Tradition, ritual, and custom.
The way things have always been.
The voices of some of the rich and the powerful still (over)valued by a multitude despite their mouthing, and living by, a rhetoric that favours the few and not the many.
Be it deference or ignorance, false information, deflection from or denial of, the things that should concern us all.
Whilst the NHS faces what patients and professionals all insist is the worst crisis ever, whilst the (some still suggest) most powerful person in the world behaves more like a child than a man,
We are told that ‘nothing has changed’ and that our rulers, are ‘strong’ and ‘stable’, ‘steady’ and ‘genius’ whilst simultaneously the ideological goalposts sliver and shift and slip in the sand.

Tradition, ritual, and custom.
The way things have always been.
‘Boys will be boys’ still in 2018 despite a hundred years of women’s suffrage and hundreds and thousands more of the fight for equality for all.
From harassment – verbal, physical, sexual, online and face-to-face – to un/equal pay to media double standards on whose voices ‘need’ to be heard and those that continue to be silenced.
Add to this the ‘no sense of humour’ old chestnut used to attack those who, in any way, question and challenge,
And it’s no surprise that, contrary to much evidence, some feel able to continue to speak of the undeserving and those who bring misfortune all on themselves.
‘The problem lies with the individual’ they say, and is not the responsibility or fault of the state or of the way things have always been.

Traditional, ritual, and custom.
The way things have always been.
When those whose job it is to hold the powerful to account provide at best a weak critique we must continue, despite our sometimes despair, to respond, to resist, to work together for something better.
Whatever our differences, with respect and through openness we can be, we are, so much more,
But beware those who try to divide us and others suggesting that passivity is best.
Is it worth the effort, the struggle? Yes it is. For who can prefer the politics of hate and of fear over hope and belonging; love and community; friendship and trust?

Change isn’t easy. Not least when it frightens those less safe at the top.
Tradition, ritual, and custom.
And, the way things have always been,
Can not be, must not be, taken for granted, unchallenged, unchanged.


With eyes and hearts wide open; the only way forward.
Posted by arwenackcerebrals at 08:15 No comments: