From Animal Farm to Finding Dory Part 1 | Reflections on Politics, Paranoia and Community

I am feeling the need to add some of my own thoughts to a current political discussion. 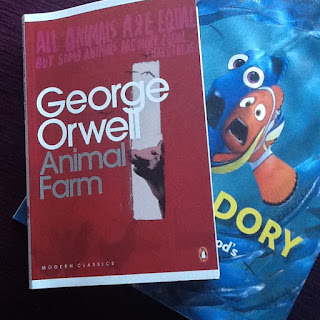 I appreciate it's Saturday so if you're tired of it all or need a break please ignore.

Recently I received an email from the Labour Party confirming my vote in the current leadership election,  as long as I continue to support the aims and values of the party. I have voted Labour at least since my personal political awakening in my mid-twenties prompted by an A Level evening-class in Sociology taken at my local FE college (I’m ashamed to say I can’t remember if I voted at all before then). An undergraduate and postgraduate qualification in Sociology plus 25+ years of teaching, researching and writing have only strengthened by concerns about in/equality and in/justice.

My email reminds me that ‘The Labour Party will not tolerate abusive or threatening behaviour by supporters or members'.  I would never abuse in person or via social media anyone for their political beliefs. I have and will continue to disagree, debate, argue, protest and (attempt to) persuade. Between signing up to be a registered supporter in the 48 hour window the NEC provided and the time of receiving my email I stopped liking or sharing anything on Facebook or Twitter that was supportive of my preferred candidate and what he stands for and/or challenging of the behaviour of the PLP or NEC. Paranoia reminiscent of the fear of Big Brother in Orwell’s 1984 possibly. But the recent challenge to the elected leader by the PLP, the changes imposed by the NEC on who can vote, who can attend meetings and other such restrictions and developments leaves me, and I know others, thinking that, to paraphrase Orwell (Animal Farm 1945) ‘All Labour Party members and supporters are equal but some are more equal than others’.

My discipline training and research experience has resulted in, I think, a healthy questioning of what main stream media (MSM) news tell us is so which just now is bordering on incredulity. Recent academic studies highlight the scale of the anti-Corbyn media bias. https://www.rt.com/uk/353891-bbc-media-bias-corbyn/. So the reproduction of obvious untruths alongside selective and clearly biased representation are endemic. Worse still are the blatant attempts to apportion inappropriate blame (e.g. 65% of Labour voters voted to remain whereas only 39% of Conservative voters did https://yougov.co.uk/news/2016/06/27/how-britain-voted/ and voting intention polls indicated that Labour and the Conservatives were neck and neck before the Labour coup) and or to discredit and deride. There are many, many examples here but I’ll point out two recent ones both from The Telegraph:


Reflecting on Corbyn’s long-term commitment to human, animal and environment rights, and on issues such as democracy, enfranchisement and political debate all of this makes me want to weep.

If you’ve read this far I guess by now you might be wondering how Finding Dory fits in. In the film's predecessor; Finding Nemo, Dory, the Blue Tang fish who encouraged the Clown fish Marlin to carry on in his quest to find his son Nemo, entreats him to ‘just keep swimming’. I’ve written before about the significance of this advice and how it has been useful to me personally, not least with reference to loss and grief:

Recently, I read a response to a post on a Corbyn supporting Facebook page which included an image from the scene in FN when a shoal of fish caught in a fishing boat net ‘all swim together’ at Nemo’s urging in order to break free. Clearly then I’m not the only one who thinks this film also highlights the value of working together, community and comradeship. You can see the clip here:
https://www.youtube.com/watch?v=sUTt0LMhyas

I’m off to see Finding Dory later today . . . more soon.
Posted by arwenackcerebrals at 03:01 No comments:

All Hail the Stereotype: ‘left wing’ beards and non/motherhood

Like many of us my life in the last two weeks has been largely dominated with the news. What with keeping up with accounts of the UK referendum fallout and hate-related violence here and elsewhere, trying to make sense of the claims and counter claims and work out the significance and influence of the possible truths and obvious lies there is little time for other cultural consumption. Indeed, it’s become something of an addiction for me resulting in more than one late night watching, listening and reading. 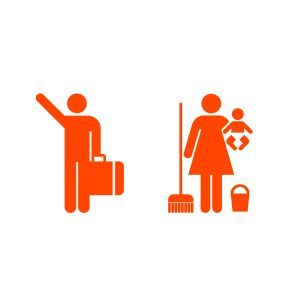 Earlier in the week I found one piece (dated a few months ago so to some this might be old news), admittedly written in a newspaper known for its vulgarity, claiming that Jeremy Corbyn has a ‘left wing beard’. I’ve been married twice and for much of our respective years together each of my husbands favoured facial hair rather than the clean shaven look. Their politics were different, but despite the colour (one was a brunette, the other a red-head) their beards looked much the same. I imagine a project in the making but it’s already been done and there are articles and blogs on such issues as ‘the politics of male grooming’ and ‘the philosophy of shaving’. There’s always room for more work of course and I wonder if any of my friends have any ‘data’ to share? A short internet search and I found another, equally ludicrous article, describing Corbyn as a ‘joyless vegetarian’ in need of a few good steaks. And just this week yet another implying that it was inappropriate of him to attend his allotment association annual general meeting given the current situation within the PLP. The leader of the opposition, the article states, likes to make ‘jam for friends and family’ with some of the produce he grows. So, this is where he’s going wrong:  doesn’t he know that it’s women who are closer to nature, women who nurture and care, because, and only because, they give birth? . . . . Enter Andrea Leadsom, Conservative leadership candidate, who feels that, as a mother, she has a ‘real stake in the future’ and thus an advantage over her childless and obviously ‘really sad’ opponent Theresa May. There have already been responses to this, including from Leadsom herself, to which I add the following.

Across a large body of academic publications, and personal writings, based not only on my own experience but on a significant number of research projects with different groups of people who do and do not parent I have argued (amongst other things) that:

-        Whether biological or social parents OR not, few adults lead ‘childfree’ lives and most of us interact with, work with and for, support and are supported by, individuals from across the generations.

-        The experience of parenthood is joyful and difficult and therefore an ambivalent experience. Similarly, nonparents are aware of the ambivalences - the positives and negatives -  of childlessness. So, despite regular suggestions that they are the involuntarily childless are not ‘desperate’ individuals (although they may feel desperation about this aspect of their lives) as other experiences, achievements, relationships are also relevant to their identity and sense of self. Additionally, the stereotype of the ‘selfish’ voluntary childless is just that a stereotype. Of course there are people without children who we might feel are selfish but having children is not a cure for selfishness and there are parents who are egocentric, self-interested and lack consideration for others.

-        Although motherhood, is still thought by some to be women’s ultimate fulfilment, motherhood and mothering is defined as an inappropriate choice for women if not achieved in the so-called ‘right’ social, material, sexual and so on circumstances. I’m thinking here of criticisms of those who mother too young, or too late, or within same sex relationships, or alone and of those who combine motherhood with paid work outside the home or those who stay-at-home and ‘smother’ their children, etc. etc. Basically it’s much easier to get it wrong than to get it right.

-         Men provide care too. They can and do nurture  –  children, partners, friends. . . vegetables and fruit – and yet although we insist we want them to do more of this they are sometimes disadvantaged, even ridiculed, when they do.

To suggest that a woman, or a man, who does not have any (biological) children has no understanding of or interest in the next generation(s) is ridiculous, to imply that they are less concerned about local and global in/equality and in/justice offensive. Thirty years ago when my (to my knowledge) one and only pregnancy ended in a miscarriage at 16 weeks I felt bereft and less than a woman. Now closer to 60 than 50 I no longer feel this way. My life has been and remains (on the whole) full and rewarding. It is further enriched by the children of others: students, younger colleagues, the children and grandchildren of family members and friends. And yet I am regularly reminded, in casual conversation, by the media, as well as in my daily life experiences of what I do not have. I cannot claim to know how May reacted when she read the article in The Times. I do know how I felt.
Posted by arwenackcerebrals at 08:18 No comments: