On a daily basis, we speak to hundreds of people and families who are desperately trying to escape the devastating trap of homelessness. A trap that is tightening thanks to decades of failure to build enough affordable homes and the impact of welfare cuts. (Polly Neate chief executive of Shelter).

The absolute shortage of genuinely affordable housing for low income households in large parts of the country continues to be intensified by welfare policy. The benefit cuts introduced in this decade, and those planned for coming years will cumulatively reduce the incomes of poor households in and out of work by some £25 billion a year by 2020/21. This is in a context where existing welfare cuts, economic trends and higher housing costs associated with the growth of private renting have already increased family poverty to record levels. (Crisis ‘The Homeless Monitor: 2017’)

Both the above from: https://evolvepolitics.com/in-truth-i-dont-know-shameless-tory-homelessness-minister-plays-dumb-refuses-to-blame-tory-policy-on-shocking-rise-in-homelessness/

Why are growing numbers of mothers and babies stuck in B&Bs?
The number of children living in temporary accommodation in Britain has been increasing steadily since 2011, from 80,000 to an estimated 128,000 in December 2017, according to the housing charity, Shelter…

Official statistics on temporary accommodation don’t break down children by age group, or include all families affected. But a Society Guardian investigation has revealed that towards the end of 2017 there were at least 26,152 under-fives in temporary accommodation in England alone, 2,341 of them living in B&Bs. Those figures are likely to be significantly higher, because a quarter of freedom of information requests weren’t answered. Several of those councils were in the capital, where the numbers of homeless families are highest. https://www.theguardian.com/society/2018/jan/17/mothers-and-babies-under-fives-bandb-temporary-housing

Plans to issue £100 fines for begging are to go ahead, Poole council has confirmed.
The introduction of fines in the Dorset town was put on hold last month following criticism from the Bishop of Sherborne and residents.

But the Borough of Poole says the fines will now come into force from 16 April.
The Public Space Protection Orders (PSPOs) will be in place in the town centre, Holes Bay, Alexandra Park and the Ashley Road area.

Under the rules, fines could also be given to those found sleeping in car parks and doorways.
http://www.bbc.co.uk/news/uk-england-dorset-43397938

A homeless man has told HuffPost of his 'absolute shock' after waking up next to his dead friend, near a busy Sainsbury's in Central London
James who declined to give out his last name, shared the horrific news of how he was told by police early Tuesday morning that the man, his friend who was sleeping beside him had died during the night on a pavement outside London's busy Tottenham Court Road.

What is even worse this death comes just mere days after 100 rough sleepers were evicted from a disused building not far from Tottenham Court Road. The building which had been turned into a makeshift shelter by volunteers hoping to protect as many of the homeless community experiencing sub-freezing temperatures during March.

“It’s an absolutely shocking thing to wake up to… I thought we were been (sic) woken up (by police) to be moved on,” James has said. Why is this still happening in the world?
http://www.thewallofcomedy.com/viral/homeless-man-dies-outside-sainsburys-in-central-london/

Tories will break pledge to rehouse Grenfell survivors, says Javid
[O]f the 209 households needing rehousing only 62 had so far moved into permanent new accommodation, Javid said. In total, 188 had accepted offers of temporary or permanent homes and 128 had moved in.

There were still 82 households in emergency accommodation, mainly hotels, including 25 families and 39 children, he told MPs.
https://www.theguardian.com/uk-news/2018/mar/22/tories-will-break-pledge-to-rehouse-grenfell-survivors-says-javid-fire

In a recent interview, Britain’s new homelessness minister Heather Wheeler MP said that she did not know why so many people were rough sleeping or homeless:

'In truth, I don’t know. That’s one of the interesting things for me to find out over the last eight weeks that I’ve been doing the job.'  https://evolvepolitics.com/in-truth-i-dont-know-shameless-tory-homelessness-minister-plays-dumb-refuses-to-blame-tory-policy-on-shocking-rise-in-homelessness/


Meanwhile, despite not knowing the reasons for it (!), the Conservatives have announced plans to eliminate homelessness by 2027:

Councils with high levels of rough sleepers will be given cash from a £30m fund and a task force will be created to examine the problem, said Communities Secretary Sajid Javid. . .

"No one should ever have to sleep rough and this Government is determined to break the homelessness cycle once and for all." The task force will have representatives from government departments and agencies with knowledge in areas such as mental health, addiction and housing.

There will also be £100,000 of funding for frontline workers to improve their skills. Mr Javid added: "Tackling the causes of rough sleeping is undoubtedly complex but we must do all we can - working across central and local government, the voluntary and charity sector - to help the most vulnerable in society and eliminate rough sleeping for good."

Shadow housing secretary John Healey said the plans were "a pitiful response to a national crisis that has grown worse every year since 2010". He added: "You can't help the homeless if you won't provide the homes, and the money announced here is less than 1% of the Conservatives' annual cut to funding for new low-cost housing."
https://news.sky.com/story/well-end-homelessness-by-2027-says-government-11308998

Here’s another response to Ms Wheeler (and the Conservatives more generally):

Last year, 3,421 Bristol families were threatened with homelessness. There are, of course, a lot more, but those are the ones recorded. That figure is three times more than 2010.

There were officially – and we use that word loosely – 74 rough sleepers in Bristol, and yes, that is an 825 per cent increase since autumn 2010. Again, many more are out there that we do not know of. . .

Last year, 347 Bristol families were made homeless after the end of a shorthold tenancy.

You guessed it. That is a 1,057 per cent increase from 2010. That is not a typo, by the way.
Not forgetting that cities like mine are stuck in a housing crisis, where access to affordable housing is not great, to put it lightly. . . .
https://www.bristolpost.co.uk/news/bristol-news/opinion-new-homelessness-minister-doesnt-1403218

So what of Labour’s position? Well there’s this:

Now about 60 per cent of all houses are owner occupied and the mortgage debt has reached £1.35 trillion (according to the Money Charity). This represents 50 per cent of the banks' lending and is why house prices must be maintained to protect the bankers' collateral.

Meanwhile only the most affluent can afford to buy and for the rest with dwindling numbers of council houses, private renting is the only option giving Gresham's Law [a monetary principle stating that 'bad money drives out good'] a new lease of life as bad landlords unrestricted by any controls, drive out the good. At best this will lead to tenants moving further out of town and at worst into cardboard boxes on the pavement.

As a start while recognising that many people have taken advantage of easy mortgages to buy their homes and are building valuable assets many more 20 to 40 year olds, even though they have good jobs are unable to find secure places to live.

The solution is to provide more dwelling space to rent or buy at the right price and in the right places.

Private renting used to provide many first homes and now Labour will make three year tenancy agreements the norm with rent rises tied to inflation. There will be no agents’ fees for tenants; landlords will need a license and tenants will be empowered to take legal action to force landlords to make improvements to substandard homes. . . . 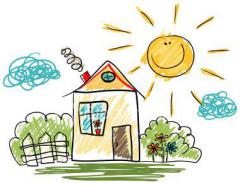 With regard to Council tenancies the ban on long term renting will be abolished as will the “bedroom tax”. Right to Buy will be suspended if like for like replacement cannot be guaranteed and new homes will be built to high standards.

As for home ownership Labour recognises the natural desire of possession and proposes to guarantee the Help to Buy scheme until 2027 giving priority for purchasing to local people. The scandal of leasehold giving freeholders the right to increase ground rents will be abolished.
https://labourlist.org/2018/01/housing-policy-has-been-failing-for-30-years-heres-how-labour-respond/

And why not watch this:

@jeremycorbyn: Under this Tory Government housebuilding has fallen to its lowest level since the 1920s. But despite this, Labour councils, like in Milton Keynes, are using their powers to build the homes our communities need.
https://twitter.com/jeremycorbyn/status/980039692920983553

NB: this is my second Blog in a #VoteLabour3rdMay series. See the first at:
http://arwenackcerebrals.blogspot.co.uk/2018/03/one-aspect-of-bigger-picture.html