Sex, Gender and All the Rest | Hidden, Airbrushed, Suppressed and Oppressed PART ONE (adverts, jobs, Dr Who etc.)

Last week included three of my favourite days in my working year: the British Sociological Association Auto/Biography Study Group annual summer conference. This year the theme of the conference was gender.  Auto/ Biographical work accepts the dynamic relationship between the self (auto) and the other (biog) and along with others I would suggest that all writing is in some ways auto/biography in that all texts bear traces of the author and are to some extent personal statements (e.g. Lincoln and Denzin 1994, Letherby 2014) within which the writer works from the self to the other and back again. Such writings then include intersections of the public/private domains of the researcher and the researched / the biographer and the biographee / the autobiographer and his/her significant others, and always acknowledges the significance, the presence, of the writer (Stanley 1993). So, as Liz Stanley (1993: 49) notes:

The notion of auto/biography is linked to that of the ‘auto/ biographical I’. . . The use of ‘I’ explicitly recognises that such knowledge is contextual, situational, and specific, and that it will differ systematically according to the social location (as a gendered, raced, classed, sexualised person) of the particular knowledge-producer.

With this in mind I acknowledge that what follows is of course influenced by my own ongoing socialisation and experience of living in a gendered world.

Sex and gender concerns are very much the topic of conversation at the moment. In this two part Blog entry I focus on just a few of the (interconnected) issues that those active in mainstream and social media and politicians, celebrities and everyday folk are talking and writing about.

I begin with the issue of gender stereotypes and experiences with reference to both occupation (paid and unpaid) and the representations of these. The Advertising Standards Agency (ASA), following a series of complaints about ads that featured sexist stereotypes or mocked people who didn't follow traditional roles, has recently announced its aim to ‘crack down’ on such adverts http://www.bbc.co.uk/news/business-40638343

Guy Parker, the chief executive of the ASA, said:

While advertising is only one of many factors that contribute to unequal gender outcomes, tougher advertising standards can play an important role in tackling inequalities and improving outcomes for individuals, the economy and society as a whole.
https://www.theguardian.com/media/2017/jul/18/a-balancing-act-readers-on-plans-to-crack-down-on-sexist-adverts

Whilst of course I welcome the challenge to the depiction of girls as only ballerinas and boys as only engineers (e.g. Aptamil Baby Milk Formula advert), rather than both girls and boys as both ballerinas and engineers it distresses me we are even having this discussion in 2017 given the long-time resistance to such representations. The spray-paint response to this Fiat advert dates to 1979 → 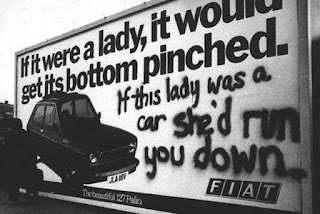 And yet, still for some this latest move by the ASA is ‘an attack on freedom of speech’ and ‘political correctness gone mad’. If you know anyone who thinks this encourage them to view this YouTube video. Look at the shock on the children’s faces, and listen to the reference to 'dressing up', when the identity of the surgeon, fighter pilot and fire fighter are revealed → https://www.youtube.com/watch?v=qv8VZVP5csA

Sadly, it seems that it is not only children that need educating. We have been reminded yet again how much women’s contributions, in history and to-date, are denied following Philip Hammond MP’s suggestion that trains are so easy to operate now that even women can drive them. (Hammond is not the only member of the Conservative Party to resort to casual sexism when discussing such issues: remember Theresa May's reference to 'girls' and 'boys' jobs during her general election BBC One Show appearance). Amongst other works Hammond needs to acquaint himself with 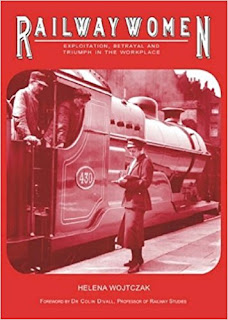 Railwaywomen: Exploitation, Betrayal and Triumph (by Helena Wojtczak). Journalists need some help too. If you haven't already watch Andy Murray educate one here  →  https://www.theguardian.com/sport/video/2017/jul/13/andy-murray-corrects-journalist-wimbledon-overlooking-female-video and then ask yourself whether or not the laughter in response is appropriate.

My favourite (twitter) response to the announcement that the actor (which is a generic term, so NO need to describe her as an actress, or female actor) Jodie Whittaker is the be the 13th Doctor Who went something like ‘I don’t care what sex my doctor is as long I get to see him or her before the Tories sell of the NHS’. Alongside much praise of Whittaker as a performer and the celebration of her as a role model for both girls and boys there is the uproar and incredulity that a fantasy figure who variously claims to be between 450 and 2000 years old, has two hearts and travels through space and time in a phone box, could possibly regenerate as a female. This wonderful Doctor Who bingo (not sure who to credit it to) highlights just some of this weird, sad critique: 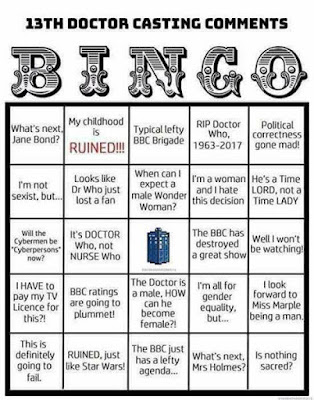 Even more depressing is the coverage in some of the mainstream media that deems it important for us all to be reminded of what the new Doctor’s breasts look like. Strangely that they have never felt it necessary to show us either of the previous dozen ‘in the flesh’. There is speculation, of course, about how much Whittaker will be paid for the role and whether or not this will match that of her recent predecessors. Unlikely, given that we know now that the BBC values, in monetary terms at least, the work of men much more highly than that of women which according to some is, like many things, women's own fault http://www.bbc.co.uk/news/uk-40744426 . . . .

For those interested in The Handmaid's Tale reference see PART TWO of this Blog entry to follow soon.

References (for Part One)