What's Being Nice (or Nasty) Got to Do With It? | TURN LEFT and Make June the End of May


On Tuesday (30th May) Theresa May gave a speech as part of the (relaunch) of the Conservative Party's Campaign in the run up to #GE2017. The branding was a little different with more emphasis on the Party rather than just the Prime Minister herself but otherwise little had changed. There was as usual a focus on Brexit; little detail but the insistence (as ever) that Theresa May is the only one strong enough to get ‘Britain the best deal’. Perhaps inevitably then the speech included the regular, and what has become frankly boring, attack on the Labour Leader, Jeremy Corbyn. Over the last few weeks I have been shocked on very many occasions by both the lack of serious detail and debate provided by the Conservatives and the extent of the focus on personality politics. This speech shocked me once again. Mrs May said:

Last night [Battle for Number 10 debate] showed that Jeremy Corbyn’s minders can put him in a smart blue suit for an interview with Jeremy Paxman, but with his position on Brexit, he will find himself alone and naked in the negotiating chamber of the European Union. I know that’s an image that doesn’t bear thinking about…

There was some laughter and a pause for the Prime Minister to elicit a little more before she continued:

…but actually this is very serious.

I was not the only one to immediately think that if this had been the other way around – i.e. Mr Corbyn speaking about Mrs May - there would have been, quite rightly, an outcry. As Corbyn himself has responded ‘I think it totally inappropriate to describe anyone as naked. Even me.’

A year or so ago I read a John Niven novel entitled The Second Coming (published by Vintage 2012).  Basically the plot is as follows (taken from the advertising detail):

God takes a look at the Earth around the time of the Renaissance and everything looks pretty good – so he takes a holiday. In Heaven-time this is just a week’s fishing trip, but on Earth several hundred years go by. When God returns, he finds all hell has broken loose. . . There’s only one thing for it. They’re sending the kid back. JC, reborn, is a struggling musician in New York City, trying to teach the one true commandment: Be Nice! (my emphasis).

I appreciate that this book will not be to everyone’s taste but from my reading of it (admittedly speaking as an uncertain agnostic) I would suggest that the work is not an attack on Christianity, or religion more generally, but rather a humorous book (drawing on a story most of us are familiar with) with a serious message: Be Nice. Surely this is a missive we can all support whatever our religion or political learning (or maybe not). Nice is not a word full of drama or razzmatazz. My thesaurus encourages me to replace it with charming, gracious, kind, commendable, admirable and other such words. But, in this context nice is more than good enough, encompassing as it does all of these other terms, so I’ll stick with it.

On Monday I travelled from my home in Cornwall to Aberdeen, where I’ve been working for the last couple of days (it’s a long trip which including one delay took me more than 12 hours in total and included trains, a plane and a taxi). At the start of the journey I met a group of German women who had spent the previous 10 days walking the coastal path. A little confused about our railway and ticket system they asked for my help. Consequently I not only spoke to the train manger on the branch-line train on their behalf but went with them to the ticket office at the mainline station where they were to catch the next train on their journey to Gatwick airport. This didn’t take up much of my time and I enjoyed talking with them. The group were clearly delighted with the small bit of help I’d given. ‘Everybody is so friendly here’, one of them told me. Attune to such encounters throughout the long journey I observed many small kindnesses - help locating seats, standing aside for others to go first – and friendly exchanges between people. There was also one incidence of ‘train-rage’ (an argument over the stowing of bags) that left at least a number of people upset. For all involved the nicer incidents were much more pleasant and far less stressful.

My heart, like that of many others, has been warmed by the much more significant and wide-scale displays of niceness by (most of) the people of Manchester following the terrible events there last week. I was online when the attack happened and it was wonderful to see the very many tweets and re-tweets with offers of shelter for the night, use of phone chargers, free taxi rides and food, plus the helpful phone numbers and other useful information. There was much evidence too of people rushing to help, to do whatever they could. I was appalled of course by the soon to follow reports of verbal and physical attacks on Mosques and Muslims in the streets, which ironically included, we have heard just recently, a Muslim surgeon who worked for 48 hours following the attack: ‘Go back to your own country you terrorist, we don’t want people like you here. Fuck off’, a man shouted at him when he was next on his way to work. Despite such hateful and sad displays of abuse the support worldwide and at home – from images of the Union Jack on buildings as far-spread as Toronto to France the day after the attack to a peace march for people of all religions organised by the Muslim community in Manchester on Sunday -  again lifted all our spirits. 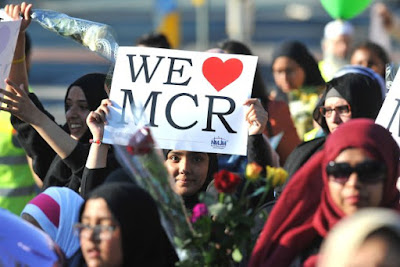 From momentous events, such as the horror in Manchester to everyday mundane experiences, it is clear that there is indeed much niceness about. And yet we are living in a society where, as Ken Loach (and many others) has noted several times, our Conservative Government promotes and defends policies and practices that are ‘consciously cruel’. And this cruelty, this nastiness, extends to the Conservative Government’s behaviour during the run up to June 8th. Whereas the Labour Party Campaign continues to be about policy, policy, and more policy (and how to fund and enact said policies) the Conservative Campaign (such that it is) is focused mainly on personality. It seems however that this may be a mistake. More and more people are beginning to ask questions such as:

‘How can we believe the Prime Minister when she tells us that she is ‘strong and stable’ and the best person to ‘negotiate for us aboard’ when she avoids much of the public; difficult questions from journalists and face-to-face debate with the Leader of the Opposition?'

‘On what grounds can Theresa May and her ‘team’ claim to be ‘Compassionate Conservatives’ when what policies they have seem to continue the agenda of cruelty (towards many, many human and non-human animals)?'

‘How can we take the campaign seriously when every question about the Tories’ record or their plans for the future if re-elected is answered thus: ‘It was worse under the last Labour Government’ and/or ‘forget that let’s talk instead about something Jeremy Corbyn did or did not say 30 years ago?’’

A while ago I read an interesting article comparing Donald Trump’s behaviour in office to that of a child. For example; wanting to be the centre of attention, unable to take turns, shouting ‘it isn’t fair’ when things don’t go his way.  Personally, I think this is a little unfair to very many children. But footage of the US President pushing his way to the front in a recent NATO meeting with other world leaders and viciously pulling at rather than shaking the French President’s hand (presumably because he was not the first to receive a greeting from Mr Macron) certainly demonstrates his nastiness. As we see from the Tories’ record, current behaviour and plans for the future there is much nastiness on this side of the pond also. In another pieces I've read of Trump’s loneliness in power (which seems increasingly relevant to Theresa May’s position also) and in yet another both Trump and May  were described as 'victim leaders', as in: ‘I am great but everyone is horrible to me, and if you dare to disagree with me I’ll sulk and be nasty to everyone else’. Jeremy Corbyn’s approach and style on the other hand has been compared to that of a ‘servant-leader’: confirmed I’d suggest by his comments on Tuesday evening on BBC1’s The One Show https://www.thecanary.co/2017/05/31/forget-what-media-says-this-truly-important-part-corbyns-one-show-appearance-video/

Some argue that the term servant-leader has been in use for more than 2000 years. The terms was revisited by Robert K. Greenleaf in his 1970 book The Servant as Leader thus:

The servant-leader is servant first … That person is sharply different from one who is leader-first. . . 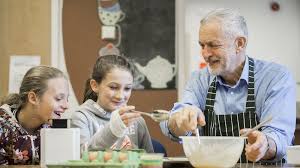 The difference manifests itself in the care taken by the servant-first to make sure that other people’s highest priority needs are being served. Do those served grow as persons? Do they, while being served become healthier, wiser, freer, more autonomous, more likely themselves to become servants? And what is the effect on the least privileged in society? Will they benefit or at least not be further deprived? 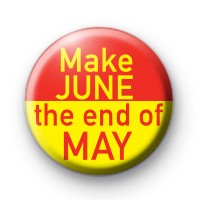 In other words the servant-leader is nice, VERY NICE.

So: What’s Being Nice (or Nasty) Got to Do With It?

YOU KNOW WHAT TO DO

TURN LEFT and Make June the End of May

NB: as previously noted less references/links in pieces leading up to #GE2017 – apologies.