It distresses and horrifies me to be writing yet again about food (and other) poverty. Last summer I wrote (amongst other things) about a particularly offensive response from Simon Hoare (Conservative) MP to a tweet by Jeremy Corbyn MP:

@jeremycorbyn: This is a national disgrace. We can't have millions of children going hungry over the school holidays.

@Simon4NDorset: Go on Jezza: do your thing with the loaves and the fishes! Best to stop walking on the water before you do though.
http://arwenackcerebrals.blogspot.com/2017/07/hungry-children-responses-from-left-and.html

I also had letters published in a local newspaper (The West Briton) and in The Guardian on school summer hunger. Last month, following yet another example of Tory crassness, I had another letter published in The West Briton thus: 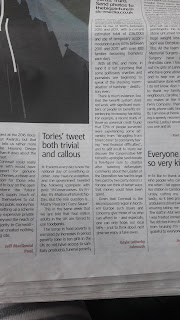 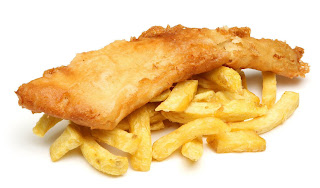 Tories’ tweet both trivial and callous (NB: they printed the letter in full but changed the title. I preferred mine: ‘Let the eat chips’) Published 28th June 2018

It seems that very day is now the national day of something or other. June 1st was no exception and to mark this particular 24 hour celebration the Government tweeted the following (complete with poll):

This in the same week that we are told that four million adults in the UK are forced to use foodbanks. The surge in food poverty is mirrored by increases in period poverty (one in 10 girls in the UK do not have access to sanitary products), funeral poverty (about 4,000 people a year have public health funeral; the modern equivalent of a Victorian pauper’s funeral), homelessness (a rise of 169% between 2010 – 2017, with a current estimated total of 236,000) and use of temporary accommodation (up by 65% between 2010 – 2017, with over 100 families becoming homeless each day). With all this, and more, in mind it is not surprising that some politicians, charities and journalists are beginning to speak of the shocking ‘normalisation’ of hardship, destitution even. There is much evidence too that benefit system does not work with significant numbers of people on benefits experiencing increasing hardship. For example, a recent study of those on Universal Credit found that 72% of people surveyed were experiencing some adversity; from ‘struggling from time to time’ to constantly having ‘real financial difficulties’. And to add insult to injury we discover that the Conservative MP forced to apologise (and donate a five-figure sum to charity) after tweeting defamatory comments about the Leader of the Opposition has had his legal fees paid by two Party donors. I for one can think of better ways that money could have been spent.
Given that Cornwall is the second poorest region in Northern Europe such issues and concerns give those of us who can afford to, and especially, one can only hope, our local MPs, a lot to think about next time we enjoy a take-away.

Interestingly the same edition of the newspaper has a double page ‘Big Story’ entitled ‘Universal credit scheme locks people into ‘debt, hunger and destitution’. Most shocking here (as noted in my most recent newspaper letter) is the growth and seeming (by some) acceptance of destitution (a word many of us associate with extreme Victorian inequalities) as a normal aspect of 21st century living for an increasing number of individuals and families. As Campbell Robb, chief executive of the Joseph Rowntree Foundation (JRF), has said:

“To be destitute doesn’t just mean getting by on very little, it’s losing the ability to keep a roof over your head, eat often enough, or afford warm clothes when it’s cold. You can’t keep yourself clean or put the lights on. This shouldn’t happen to anybody, let alone over one and a half million people in the UK.” https://www.theguardian.com/society/2018/jun/07/universal-credit-tips-poor-into-hardship-says-charity

And further, reporting on a recent study by the JRF, as Francis Ryan writes:

Poverty has long been put down to mythical causes, be it a quirk of society – as if inequality is built into the earth – or an individual’s failings (why don’t they breed less? Work harder? Buy fewer cigarettes?) The JRF study in unflinching at skewering this. The reasons for destitution are complex, but the researchers point firmly to the role of “welfare” cuts that have dominated the political landscape since the global financial crash. Social security policies can, in many cases, directly lead to destitution “by design”, the report says, leaving people “without support when they most need it”. Two in five destitute people reported problems with the benefit system, with a quarter of all interviewees citing losing their disability benefits as a key trigger of their destitution. (my emphasis) https://www.theguardian.com/commentisfree/2018/jun/07/destitution-system-poverty-standards-of-living

‘Destitution by “design”’ or as the director Ken Loach has called it 'conscious cruelty' is just one aspect of the 'political austerity' and 'hostile environment' fostered by the Conservative/Liberal Democrat Government (2010-2015) and continued and nurtured by the Conservatives since. If you're in any doubt see this: 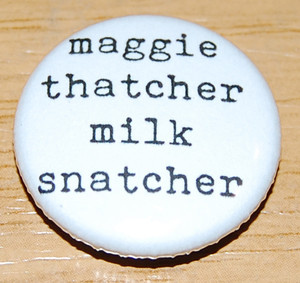 Theresa May is expected to cut a long-running milk scheme in nurseries to locate funds to pay for healthy fund vouchers for low-income parents. Conservative MPs are reportedly concerned at plans while Labour have made comparisons (sic) Thatcher's 'Milk Snatcher' title from the 1970s. . . .
https://inews.co.uk/news/education/milk-snatcher-tory-cuts/

I sometimes write political fiction. For those interested here is one I wrote last year focusing on a child’s perception of poverty: https://www.abctales.com/story/gletherby/poppy

And a couple more written recently focusing on the precariousness of life for many:
http://arwenackcerebrals.blogspot.com/2018/07/austerity-hits-parallel-lives.html