As a sociologist who engages in research, scholarly writing, teaching supervision, mentorship and so on I reflect often on the reasons for such activity. In 2013 I wrote:

In thinking back to the beginnings of my academic career it makes me smile to think how when starting my doctoral research on the experience of ‘infertility’ and ‘involuntary childlessness’ I was excited about what a difference I could make. My doctoral research was invaluable to me. It taught me a lot about the whole process of research, it fuelled my fascination in methodological and epistemological debate, it enabled me to say some useful (I hope) things about childlessness, parenthood and identity, it gave me the resources to work in an environment I continue to find rewarding and challenging. What my PhD did not do was have the impact I hoped it would. I spoke about my work at conferences, wrote some articles and chapters and a few small pieces for non-academic audiences and I am gratified that I am still sometimes asked to speak, write, examine on the topic. I could have done more but at that time I did not have the skills or the support to do so. More recently with colleagues from Coventry University I was involved in a series of projects concerned to explore the experience of teenage pregnancy and young parenthood. All of this work was commissioned by practitioners, themselves responsible for the care and support of young women, their partners and their children. In addition to positive responses to our calls for the need for further research in specific areas (e.g. violence and abuse in the lives of pregnant teenagers and young mothers, antenatal care, father’s experience) as a research team we have been, and continue to be involved in activities that could be described both as impact and as ‘public sociology’. We have, for example, developed and delivered (with young mothers) training packs for health and social care professionals; trained young mothers to become peer researchers and developed a questionnaire for young women entering and leaving semi-supported housing. In addition we have presented and published of our findings within and beyond the academy (e.g. at local and regional meetings of those responsible for the deliverance of the UK Teenage Pregnancy Strategy, in the local and national press and in practitioner-focused publications) … (Gayle Letherby, (2013) ‘Objectivity and Subjectivity in Practice’, in Letherby, G. Scott, J. and Williams, M. Objectivity and Subjectivity in Social Research London: Sage).

What my research experiences have taught me is that the impact we make is in part down to our own efforts and in part determined by the work of others including funders, research partners, those responsible for policy and practice change etc. (Gayle Letherby and Paul Bywaters (2007) Extending Social Research: application, implementation, presentation Buckingham: Open University). What I hope, along with others I work with,  is that my research will make some kind of difference, make some small impact (in the broadest sense within, beyond and besides the academy). Thus, there is a political motivation here. Acknowledging both the strengths and the limitations of the academic project (I’ll write more on this another day) I research, write and all the rest because following Alvin W. Gouldner (1970 The Coming Crisis of Western Sociology London: Sage) I support and aim for a morally responsible, reflexive, radical, critical sociology. I do not want to exaggerate the significance and reach of my work, I am not so arrogant as to claim any greatness in it but the small steps and changes we can all make are invaluable.

I have compared research to a relay race whilst one person carries the baton for a while and then passes it on (Gayle Letherby, (2003) Feminist Research in Theory and Practice Buckingham: Open University) and the sharing of thoughts and ideas through written and verbal presentations is similar I think. I know that reading about and listening to the ideas of others encourages me to reflect and to challenge, and stimulates me to add something to discussion and debate. I hope that my work does the same for others.

With specific reference to writing there are many examples of people sharing what motivates them.  Just a few that I find particularly inspiring:

‘I want to write, but more than that, I want to bring out all kinds of things that lie buried deep in my heart'
Anne Frank

I Rise (first verse)
You may write me down in history
With your bitter, twisted lies,
You may trod me down in the very dirt
But still, like dust, I'll rise.
Maya Angelou

. . . writing as a method of inquiry, a way of finding out about yourself and your topic. Although we usually think about writing as a mode of “telling” about the social world, writing is not just a mopping-up activity at the end of a research project. Writing is also a way of “knowing” – a method of discovery and analysis. By writing in different ways, we discover new aspects of our topic and our relationship to it. Form and content are inseparable (Laurel Richardson (1994) ‘Writing: a method of inquiry’ in Denzin, N. and Lincoln, Y. (eds.) A Handbook of Qualitative Research, (first edition) Thousand Oaks: Sage 515).

Most recently  I read George Orwell's essay Why I Write (George Orwell (1946) ‘Why I Write’ in Orwell, G. (1984) Why I write (Great Ideas Series) London: Penguin). Orwell suggests:

I think there are four great motives for writing, at any rate for writing prose. They exist in different degrees in every writer, and in any own writer the proportions will vary from time to time, according to the atmosphere in which he is living. They are:

1.    Sheer egotism. Desire to seem clever, to be talked about, to be remembered …
2.    Aesthetic enthusiasm. Perception of beauty in the external world, on the other hand, in words and their right arrangement….
3.    Historical impulse. Desire to see things as they are, to find out true facts and store them up for the use of posterity.
4.    Political purpose – using the word ‘political’ in the wildest possible sense. Desire to push the world in a certain direction, to alter other people’s idea of the kind of society that they should strive after. Once again, no book is genuinely free from political bias. The opinion that art should have nothing to do with political is itself a political attitude.

(NB: I’ve just started reading Deborah Levy's (2013) Things I Don't Want to Know: A response to George Orwell's 1946 essay 'Why I write' London: Penguin, which I feel sure will lead to further reflection).

I accept almost all of Orwell’s points although I’m wary of the term ‘true facts’ in point 3 (see Bias, Truth, Trust.... below) and I’d add to point 4 that all writing, be it book, article, story, poem, research thesis and so on, is in some ways political. With this latter acknowledgement in mind at least one of the reasons I write is because of ducks with hats on:

‘Mummy, mummy there's a man at the door with a bill.’
‘Don’t be silly darling, it’s a duck with a hat on.’
OR
THINGS ARE NOT ALWAYS AS THEY SEEM 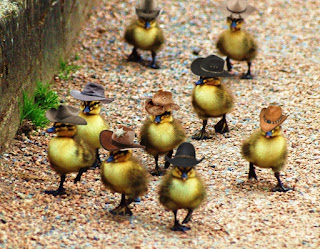 For the last few years in my attempt to work beyond and besides the academy (see above), and in trying to tell important stories in different ways I have, alongside (and sometimes within) my academic work written ‘fiction’ (acknowledging that there are truths to be found in ‘stories’ and that there is always interpretation in research*) memoir and some overtly political opinion pieces. I have also become an occasional political letter writer sending such communications to newspapers and to politicians.

What follows are links to some of my non-academic writings over the last year or so, all inevitably informed by my sociological understandings, much of which drawing on my own professional AND personal auto/biography, all - in recognition that the personal is political and the political  personal - political whether overtly so or not:

A COUPLE OF PIECES THAT DRAW ON MY ACADEMIC WRITING:
Bias, Truth, Trust | what the media can learn from social research(ers)
https://arwenackcerebrals.blogspot.ca/2017/10/bias-truth-trust-what-media-can-learn.html

AN OPINION PIECE OR TWO AND A LETTER:
84 Men, Millicent, Mary, Jesus and a ‘Monument to Tory Britain’ | #VoteLabour3dMay
http://arwenackcerebrals.blogspot.ca/2018/04/84-men-millicent-mary-jesus-and.html

SOME MEMOIR:
For John – Experiences and legacies of brutality
https://www.abctales.com/story/gletherby/john-experiences-and-legacies-brutality

Reflections of Mother’s Day as a Motherless, Childless Woman
https://www.abctales.com/story/gletherby/reflections-mother%E2%80%99s-day-motherless-childless-woman

AND SOME FICTION:
'T'was the Night Before Christmas' | a version for 2017
http://arwenackcerebrals.blogspot.ca/2017/12/twas-night-before-christmas-version-for.html

The Seven, Or So, Ages of Man
https://www.abctales.com/story/gletherby/seven-or-so-ages-man