Grieving for the BBC (and the mainstream media more generally) | #VoteLabourMay3rd 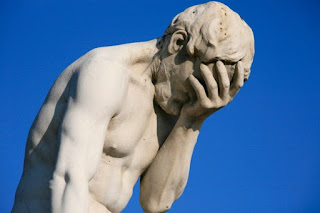 “The mass media serve as a system for communicating messages and symbols to the general populace. It is their function to amuse, entertain, and inform, and to inculcate individuals with the values, beliefs, and codes of behavior that will integrate them into the institutional structures of the larger society. In a world of concentrated wealth and major conflicts of class interest, to fulfil this role requires systematic propaganda.” (Edward S. Herman and Noam Chomsky (1995) Manufacturing Consent: The Political Economy of the Mass Media)

Like many, many people I complained to the BBC following a Newsnight edition in mid-March during the days following the Sailsbury poisoning. I’ve complained about BBC TV and radio before. This time I kept it short:

Biased and offensive representation of LOTO Jeremy Corbyn re current concerns over Russia, spy poisoning and Russian money in UK. Inaccurate representation of Corbyn’s response, lack of serious attention given to the Conservatives' monetary relationship with Russia. Bias all heightened with backdrop and photo shopping of Corbyn's hat. Disgraceful. 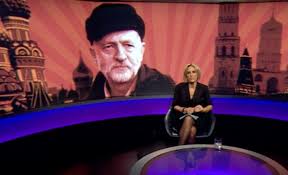 The BBC's reply to me – the same as to every complainer and the one also printed on the BBC website – included:

Newsnight is a late night current affairs programme with a distinctive style and the picture sat firmly within its long-running tradition of arresting graphics, applied to all types of stories. The backdrop was used earlier in the year, when the Defence Secretary, Gavin Williamson, was similarly superimposed. Mr Corbyn has been photographed wearing this particular hat and coat many times, and they were not in any way altered or ‘photoshopped’ to appear ‘more Russian.’

After reading on twitter that those who wrote back, insisting that this generic response did not satisfy their concerns, once again received a one-size-fits-all dismissive reply, I wrote: 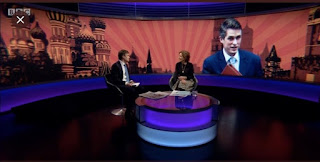 I am not satisfied with your response to my original complaint or with the general response on your website. The backdrop was obviously used differently in this case than when used with Gavin Williamson MP. Why not a picture of Mr Corbyn in a suit and tie? Why was his image redenned? If his hat was not 'photoshopped' which I find hard to believe why was not more care taken with the image? Additionally the analysis was hardly unbiased, particularly the introduction by Andrew Neil. I know, as this has already happened to me and others following other similar complaints, that you will not take this seriously and will send me a 'we have nothing to add' response. Please prove me wrong before my dwindling respect for a once valued broadcasting company falls even further.

BUT of course I received the same reply as everyone else:

We have explained in as much detail as we can at this stage of the complaints process, and we have nothing to add to our previous response. (emphasis added)

Laugh, I nearly chocked on a mouth full of propaganda and hypocrisy. 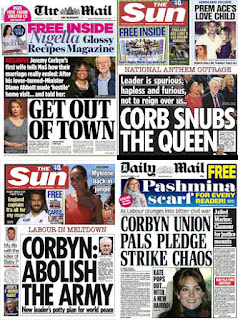 For some days before and in the days that have followed the mainstream media (TV and print) attacks on Jeremy Corbyn have been relentless. Everything he says and does is dissected and analysed, lots of things he has not done or has not said are nevertheless attributed to him and dissected and analysed. There is little space for alternative voices and views. I have no wish to give any more energy to such pieces but I'll reference one, plus a couple of twitter responses, to demonstrate just how hysterical and ridiculous some of the coverage has become.


How on Earth did we our civilization get from Jesus Christ to Jeremy Corbyn (Charles Moore, The Telegraph 30th March 2018)

IanB #NHSLove @ijbrads66: … give me strength, the absolute state of this. A man whose (sic) spent his whole life promoting justice, equality and peace is now the anti-Christ.

Aggressive mainstream media attacks on Mr Corbyn and Labour are not new of course. And there has been already been a fulsome critique. For example see:
https://www.independent.co.uk/voices/jeremy-corbyn-media-bias-labour-mainstream-press-lse-study-misrepresentation-we-cant-ignore-bias-a7144381.html

And see this piece I wrote in the run up to the General Election in June 2017:
http://arwenackcerebrals.blogspot.co.uk/2017/04/whats-propaganda-got-to-do-with-it-turn.html

And yet here we are again.

Whilst the attention is all on Labour and its Leader there are many, many other things being pushed down or off the ‘news’ agenda. Just now and not least:

-       Aggregate IQ was doing similar work for the Vote Leave campaign, according to campaign finance reports first published by BuzzFeed in the aftermath of the referendum. Christopher Wylie, a former research director for Cambridge Analytica who has become a whistleblower, testified before the British Parliament’s media committee that he helped set up Aggregate IQ and that it mixed funding and work for Vote Leave and BeLeave in violation of election laws. https://www.washingtonpost.com/world/europe/did-brexit-campaigners-cheat-and-if-they-did-what-does-that-mean/2018/03/30/5aae90aa-329f-11e8-b6bd-0084a1666987_story.html?utm_term=.2b0c67efb981

-       Palestinian officials say 15 people have now been killed [risen to 18 on 2.4.18] in a day of protest on the Gaza border, with nine shot dead by Israeli army fire and a farmer killed in a separate incident involving pre-dawn tank fire. In what was the deadliest day for the ongoing conflict since clashes in Gaza last autumn, the Palestinian health ministry said at least another 1,000 Palestinians were injured by a combination of tear gas, rubber-coated steel pellets and live rounds. https://www.independent.co.uk/news/world/middle-east/farmer-killed-israel-latest-gaza-strip-west-bank-hamas-protests-mass-sit-ins-benjamin-netanyahu-a8281116.html

-       Theresa May has dropped or shelved 40% of her party’s 2017 election manifesto, prompting accusations that she has become the “do nothing” prime minister. Analysis by the Labour Party reveals that of the 447 commitments in the Tory manifesto, 181 have been ditched or kicked into the long grass — the equivalent of four promises a week since it was published last May. https://www.thetimes.co.uk/article/do-nothing-pm-dodges-181-election-vows-says-labour-cmlq00nkp

-       Malnourished pupils with grey skin are "filling their pockets" with food from school canteens in poor areas due to poverty, head teachers say. The heads, from various parts of England and Wales, described differences in the appearance of some pupils. One head said: "My children have grey skin, poor teeth, poor hair; they are thinner."   http://www.bbc.co.uk/news/education-43611527


-       Boris Johnson is facing questions over a conversation he recounted with Porton Down officials about the Salisbury attack. The Foreign Secretary was urged to explain the answer he gave when asked why he was certain the novichok nerve agent originated in Russia. On Tuesday, Britain's military research unit revealed to Sky News it was not yet able to establish where the substance used to poison Sergei and Yulia Skripal was made.  Gary Aitkenhead, chief executive of the Defence Science and Technology Laboratory (DSTL) at Porton Down, said scientists had not "identified the precise source".  (AND SEE BELOW*)
https://news.sky.com/story/nerve-agent-attack-johnson-faces-questions-over-porton-down-claim-11315840

As I have written previously (with both social research and the media in mind):

Increasingly researchers accept that subjectivity and bias is inevitable and with this in mind I have argued that  '. . .it is better to understand the complexities within research rather than to pretend that they can be controlled, and biased sources can themselves result in useful data' (Letherby 2003: 71). It seems that journalism, or at least some journalists, are catching up. Jones suggests that there has been an increase in opinion journalism masquerading as objective reporting and Bastani argues:

There is nothing wrong with politically committed journalism, be it in comment or reportage, legacy media or new. The point is to be open and honest with one’s audience about those commitments. (added emphasis)
http://arwenackcerebrals.blogspot.co.uk/2017/10/bias-truth-trust-what-media-can-learn.html

Sadly, miserably, print and TV (including the BBC) media openness and honesty seems to be in short supply at the moment. Just last night a main story (yet again) on the BBC news was the activities of Mr Corbyn. This time his attendance at a Jewish group's Passover celebrations. The newsreader reported that Jewdas 'has argued that there is no problem of antisemitism in Labour'. As several people have pointed this is not true which given the importance and sensitivity of the current debate is unforgivable. I've written another complaint:

Inaccurate reporting of the values of Jewdas. It is very easy to find out that they have not as reported by you 'argued that there is no problem of antisemitism in Labour'. This is not only inaccurate reporting but also deeply insensitive and insulting. Unforgivable BBC. Please apologise. 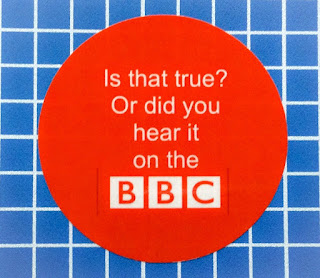 *PS: And then last evening this happened