The most political thing 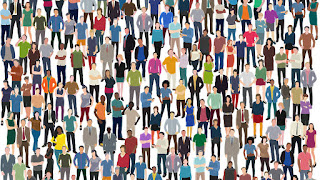 A little late to the party I have recently discovered Philomena Cunk. In the first episode of a new ‘mockumentary’ - Cunk on Britian (BBC 2) - Cunk (Diane Morgan) takes us through a whistle stop tour of the history of ‘The United Britain of Great Kingdom’. Along the way she interviews a series of experts managing to simultaneously appear interested and bored, confused and informed (if of a parallel history and world). In the first episode one of the experts was Robert Peston, political editor of ITV news. It’s fair to say that Peston, who I almost felt sorry for, was flummoxed by the question: ‘What is the most political thing that has ever happened in Britain?’ I found this surprising for, at least to me, the answer is obvious:

QUESTION: ‘What is the most political thing that has ever happened in Britain?’
ANSWER: ‘Enfranchisement, that is the right to vote, within a democracy (a system of government by the whole population or all the eligible members of a state, typically through elected representatives).

Pre-1832: Prior to the Great Reform Act, voting was dependent on three criteria – sex, age and property. Only men over the age of 21 were allowed to vote – and only if they owned property over a certain value. This was a way of making voting a rich man’s privilege, reinforced by small boroughs having more MPs than larger counties, which were predominantly inhabited by poorer workers.
The Great Reform Act – 1832: In 1832, the Great Reform Act broadened the spectrum of voters to include the likes of landowners and shopkeepers as part of the property criteria. Householders paying more than £10 in annual rent were also given the vote – and the constituency boundaries were rearranged to make representation less unfair. The act still defined voters as ‘male persons’, and continued to exclude swathes of working class workers from elections. Subsequent reforms in 1867 and 1884 increased the electorate further with broader property and rental criteria. They also continued to make voting boundaries more fair, but failed to make any changes for women.
The Representation of the People Act – 1918: In February 1918, the Representation of the People Act made two major changes to voting criteria – it removed practically all property requirements for men over 21 and allowed women over 30 to vote. Property qualifications were kept in place when giving women over 30 the vote. Men in the armed forces aged 19 and over where given the vote. This landmark change for women came after 85 years of debate on the issue, with over 15 years of protests, militancy and hunger strikes by the Women’s Social and Political Union and Women’s Freedom League.
Equal Franchise Act – 1928: Women were given voting equality to men. In 1928, the Equal Franchise Act gave all women over 21 the right to vote, removing property requirements completely.
Representation of the People Act – 1969: The 1969 Representation of the People Act made many changes we’re familiar with today. The voting age was reduced to 18, with undergraduate students now allowed to vote in their university constituency.
Adapted a little from https://www.halarose.co.uk/news/a-timeline-of-british-voting/
Currently there are campaigns to the extend voting rights to 16 and 17 year olds. These individuals can by law:
·         Give full consent to medical treatment
·         Leave school and enter work or training
·         Pay income tax and National Insurance
·         Obtain tax credits and welfare benefits in their own right
·         Consent to sexual relationships
·         Get married or enter civil partnerships
·         Change their name by deed poll
·         Become a director of a company
·         Join the armed forces
·         Become a member of a trade union or a co-operative society.
http://www.votesat16.org/about/
But do not have the right to vote.

The General Election 2018 showed just how much people want to be part of the process, part of and energetic, inclusive movement that works 'for the many and not the few'. See (for example):
http://arwenackcerebrals.blogspot.co.uk/2017/06/a-tale-of-two-campaigns-ge2017-and-some.html.

As one participant in a recent Labour Party Political Broadcast said 'Jeremy Corbyn, and the politics of the Labour Party, is an absolute inspiration. They can't say now, 'you're all alike', because they're not.' You can watch the broadcast here:

·         The Conservative Government’s discriminatory focus on the tiny issue of individual election fraud. See something I wrote previously:  http://arwenackcerebrals.blogspot.co.uk/2018/03/votes-for-all-or-not-importance-of.html


The UK Refused To Raid A Company Suspected Of Money Laundering, Citing Its Tory Donations
https://www.buzzfeed.com/heidiblake/uk-refused-to-raid-lycamobile-citing-its-tory-donations?utm_term=.ilqo5omN4#.qwVZyZjzP

Democracy OR Kleptocracy? (Kleptocracy: a government with corrupt leaders (kleptocrats) that use their power to exploit and to extend personal wealth and political  power).


A funny thing happened on the way to the despatch box

Parliamentary privileges are the ancient and undoubted rights and privileges of the Commons that are claimed by the Speaker of the House at the beginning of each new Parliament. Most of these are now obsolete but some remain active including:

Freedom of speech: members speaking in the House are not liable for defamation.

This allows members of the House of Lords and the House of Commons to speak freely during ordinary parliamentary proceedings without fear of legal action on the grounds of slander, contempt of court or breaching the Official Secrets Act.

Perhaps this explains why at PMQs the Prime Minister felt, a few weeks ago, secure enough to say of the Leader of the Opposition:

‘Normally he stands up every week and asks me to sign a blank cheque. I know he likes Czechs but…’

[NB: just one example of the false smears hurled at the Opposition, not to mention the many, many examples of less than honest responses to questions and queries on policy and practice, with the just the latest ‘lie’ or at the very least misleading of the HoC coming earlier this week in a PMQs focusing on the Windrush generation https://www.huffingtonpost.co.uk/entry/theresa-may-falsely-tried-to-blame-labour-for-the-windrush-fiasco-to-deflect-jeremy-corbyns-questions_uk_5ad74773e4b0e4d0715c25b1 More on this another day].

This  'privilege' leads to boldness outside of the House exemplified not least by the infamous tweet a few weeks ago by Ben Bradley MP, leading to the following apology: 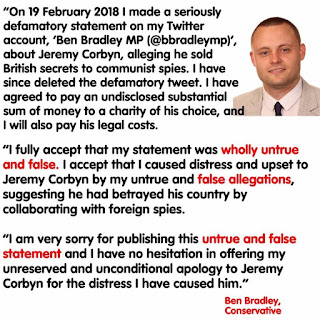 And the following by MP Jacob Rees Mogg, said in an interview for Channel 4 News:

Who also, following much pressure (on twitter) 'apologised' or at least admitted his 'mistake':

@Jacob_Rees_Mogg: Mea culpa, I was wrong to say that Mr Corbyn voted against the Good Friday Agreement. He did not.

As many have noted the word ‘sorry’ seems to be missing from this (non)apology. 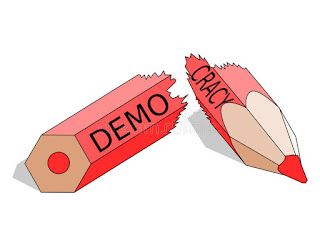 We have a government (with sadly, shockingly, some cross-bench support) that do not appear to respect democracy in any way. Just a few of examples here:

-    Refusing to vote following Opposition Day Debates on issues such as the public sector pay gap, university tuition fees and the roll out of Universal Credit.  The votes following such debates are symbolic and not binding but it is widely believed, despite the Speaker of the House calling such behaviour a ‘mockery of parliamentary procedure’ that Tory whips must have considered it less embarrassing simply not to engage with the vote, and for their MPs to abstain. With specific reference to the debate and vote on Universal Credit  Annosh Chakelein argues: ‘Without having the guts to back its policy through a vote, it revealed both dismissiveness towards the people it’s supposed to help, and lack of confidence in its own reform.’
https://www.newstatesman.com/politics/welfare/2017/10/tories-lost-universal-credit-vote-why-doesn-t-it-count

-    Refusing to recall parliament for debate and discussion prior to the recent Syria airstrikes. One of the reasons given for which was the need for ‘secrecy’ ahead of the strike which is strange given that @realDonaldTrump had already tweeted about his (admittedly at times confusing) intentions. This despite strong suggestion, not least via opinion polls and anti-war demonstrations, that the public would have wished this to have happened.  Add to this the accusation made by SNP MP Stewart McDonald that the government ‘selectively’ offered intelligence and security briefings. He told the Commons:

"These briefings appear to have been offered to members of the Labour opposition not on the basis of privy counsellor status. But on the basis of those Opposition members who are sympathetic to the Government's position. That leads to concerns that the Government is using intelligence briefings to manipulate Parliament. And to bolster its own case for its behaviour on the Opposition benches - not on security terms, but on politics."
https://www.mirror.co.uk/news/politics/theresa-denies-shock-claim-manipulated-12379369

-    Relatedly, resisting (and denying the origin of) the War Powers Act (the requirement for a parliamentary debate and vote before and military action):

@ToryFibs:
- William Hauge March 2011: I vow to “enshrine in law […] the necessity of consulting Parliament on military action.
- William Hague 17 April 2018: The idea of “enshrining in law all the circumstances when ministers need to use armed force overseas was not practical”.

During his speech on this issue this afternoon (17th April 2018) Mr Corbyn said: ‘There is no more serious issue than sending our armed forces to war – that is why we are elected to this house, that is what our democratic duty requires us to do’.

Seems hard to disagree with this and yet:

@EL4JC
This is just shocking, really. Juvenile interruptions and pointless interventions designed purely to disrupt Jeremy Corbyn's speech on a grave and serious matter. Tories really don't like democracy, do they? 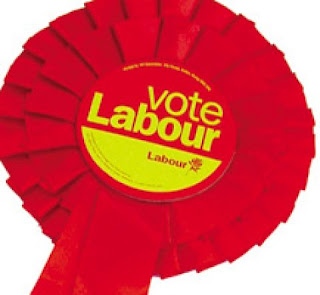 @jeremycorbyn: This year, the Tories haven’t posted anything about registering to vote. They don’t want you to vote because they know they’ve failed you. This is your chance to send them a message on Thursday 3 May. Register to vote before tonight’s 11.59 deadline: https://www.gov.uk/register-to-vote