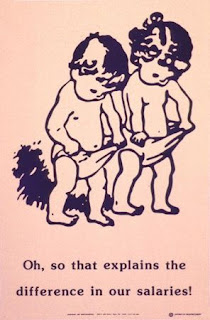 No one who watched No More Boys and Girls | Can Our Kids Go Gender Free? on BBC 1 recently can deny that there is still a lot to do to ensure that our genitals at birth do not determine our life chances and choices. I am not surprised, but still heartbroken, that seven year old girls consistently rate their abilities as less than they are and that seven year old boys find the expression of any emotion other than anger extremely difficult. One thing the two programmes showed was the importance of language and communication; i.e. the ways in which we address and label children and the ways in which we talk to them.

One especially disturbing issue of concern to many at the moment is that of abuse during online communication. There is clear evidence that this is gendered. Specifically with politicians in mind an analysis by the University of Sheffield and Buzzfield News showed that Jeremy Corbyn MP (followed by Theresa May MP) received the most online abuse during the run up to the June General Election and as a group male Conservatives received more abuse than any other group of MPs. However, whilst men were often addressed as idiot or coward, bitch and witch was commonly used in communications with women; the word ‘kill’ was also more likely to be directed at women MPs, and men, unlike women, were not subject to rape treats. As ever swear words relating to women’s genitalia were commonly used to insult both male and female MPs and non-White politicians were subject to racial stereotyping and abuse with Diane Abbott MP experiencing significant and repeated attack.
https://www.buzzfeed.com/tomphillips/twitter-abuse-of-mps-during-the-election-doubled-after-the?utm_term=.mmn392Wzx1#.yy1K1BPDRX

There is also evidence to suggest that abuse towards women often included reference to appearance (including weight) although a significant minority of that directed at Jeremy Corbyn was also appearance related. I have written about gender and language previously:

It has long been argued (seemingly supported given the frequency and vitriolic nature of their use) that the worst, most offensive verbal abuses are those that refer to women’s genitals or to women’s motherhood identity. So calling someone a cunt or a twat, a son-of-a-bitch or a motherfucker are serious signifiers of disrespect. Hearing these, alongside other swear words which derogatively refer women to animals or to food is part of the everyday sexism that girls and women are subject to. The normalisation of these descriptors though doesn't make them any easier to hear.

Social media - which I greatly appreciate both for its challenge to the mainstream media and the opportunity it provides for broad based discussion, debate and education - adds to the problem. I, and I know I am not alone in this, am dismayed by the possibilities it gives for smears and insults, bullying and intimidation; both from named individuals and those who hide behind anonymity/ alternative identities.  Indeed, on many occasions the ease of the action seems to inflame the activity. Sadly, it seems that people from all sides of the political debate; both those on the Right and on the Left, use Twitter and Facebook and so on, to assault those with whom they do not agree. Even those who are not particularly aggressive or personal in their condemnation of a person, political party, policy or news item often resort to chauvinistic abuse; unfortunately supporting the view that these are just normal, everyday, acceptable insults.  With this in mind I groan when people I admire refer to the minister for health as Jeremy *unt and I shudder when those I don’t combine racism, sizeism ageism with misogyny to describe or lambast female, and male, politicians and those that support or challenge their approach, actions and ideas. http://arwenackcerebrals.blogspot.co.uk/2017/03/mind-your-language-watching-our-ps-qs.html

Post-election the online trolling has continued and again gender appears to be an issue with – at least on my timeline – a particular focus on female Labour MPs. One recent ‘drama’ in the mainstream media, as well as online, is the response to the recently elected Laura Pidcock MPs' comments on her choice, or not, of friends. So although other Labour politicians have repeatedly made clear their distaste for friendships across the political floor Ms Pidcock’s views have been commented on, analysed and critiqued ad infinitum. See for example just a small selection in the, arguably, more left leaning mainstream press: 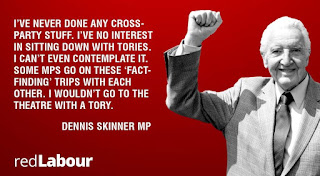 
I found one paragraph in the latter article linked here particularly interesting:

She [Pidcock] is right to be appalled at the conditions in which the poorest people live in this, one of the most advanced countries on earth. She is right to feel anger at the lack of good quality, safe housing for many, at children going hungry this summer holiday because their parents cannot afford food. Her arguments are powerfully put, representing the raw anger that many politicians have expressed over social injustices over the years. It is a pity, then, that she undermines her own case by declaring she cannot be friends with politicians from other parties. What’s more, Pidcock wheels out the tired claim that Conservatives hate women – something that is self-evidently untrue about a party which is on its second female leader.

I accept that to be effective at work we sometimes have to make alliances with people we don’t like or respect. BUT, when day after day there is more and more evidence that our current government is working hard, very hard, for the few whilst perpetuating the abuse of the many, I have more and more empathy for Ms Pidcock's views and approach. Remember this:

More felons than friends, or even foes, here then . . .

Furthermore, it is sloppy to argue that two female prime-ministers proves that Conservatives ‘like’ and support women. Not least because we know that many of their practices and policies impact most negatively on women https://www.theguardian.com/world/2017/mar/09/women-bearing-86-of-austerity-burden-labour-research-reveals and because Tory respect for women seems to based on gendered stereotypes of women’s so-called most important functions in society
http://www.independent.co.uk/voices/theresa-may-called-mummy-by-tory-conservative-activists-why-motherhood-female-power-a7707841.html

Whatever, not to worry, as Ms Pidcock continues to work hard at her job. For one example read this report of her reaction to the government’s rejection of a call to halt the roll-out of Universal Credit (which critics, including Labour MPs, argue pushes people into rent arrears, and to food banks) in the North East just before Christmas: https://www.thecanary.co/2017/08/30/labours-brightest-new-mp-slams-tories-defiant-ignorance-families-extreme-hardship/

Sticking with the theme of friends, foes and felons we are told repeatedly that those of us on the Left are quicker to express prejudice and to discriminate against and abuse others. That this is repeated, with little or no evidence, again and again is both upsetting and tiring, so very tiring. For the very many of us who support the Labour Party and continue to work, in whatever persuasive, but respectful, ways we can, to highlight the need for a government that will work ‘for the many, not the few’ this continuing critique is both disrespectful and unjust. One current criticism, from various quarters, both inside and outside the movement, is that Labour is sexist. Well, of course it is, as is every other political Party, the institutions in which we work and the families in which we live, the media we watch and read and so on and so on. After all, we live in a world that accepts that it is OK for seven year olds to express themselves and their life hopes and expectations in terms of gender difference. So how could Labour be exempt from all this? That’s not to say that we shouldn’t continue to challenge (any and all prejudice and discrimination), to work for and promote change. Of course we should be doing this and doing this together. From my own experience I can only say how much I value talking and working with all those who share my concerns about our society just now. In the late 1990s my husband John, whose life was much troubled at times, wrote and had published a poem, complete with brief explanation. Here it is:

You see us, humiliated
Most of us have lived with humiliation
Most of us

I have not.
A new experience eh?
Everyone should try everything once
Maybe not.

The poem, I hope, is self-explanatory. I would like it to mean something to people who feel threatened at times – not as individuals, but as ‘representatives’ of a ‘group’. Readers, hopefully, will find their own groups. Mine include women, black people, gays and lesbians, prisoners . . .  (John Shiels (1997) ‘You Make Me Fear You’ in K. Whitaker Perceptions England: Forward Press)

Re-reading John’s poem now reminds me of the need to make sure we highlight  – the horrors  - that we can clearly evidence – of prejudice, discrimination and hate radiating from some of those on the Right. There is a lot of material here… One example, that has been much reported in alternative medias, and some mainstream newspapers, just this week, is a supposed Conservative grassroots movement - Activate - which emerged with a clear agenda ‘to engage young people with conservatism’. Alongside other problems (maybe more on this another day) the group has been forced to apologise for extremely offensive remarks that some members have made about others they clearly consider to be of lesser value than themselves. See http://evolvepolitics.com/whatsapp-chat-activate-gassing-chavs-tories/ AND
http://metro.co.uk/2017/08/30/young-tory-activists-send-vile-messages-about-gassing-chavs-6891620/

To (almost) end where I started; language and what we do with it is important. So too is the way in which we respond to online, face-to-face, verbal, physical and material abuse.

To those who have read this far and agree (with at least some) of what I say here, please let's continue to work together, whilst respecting our similarities and our differences, for ourselves and for others; for the many, not the few.