I’ve been trying to write this piece for quite a while.  I can, I think, be forgiven for my procrastination given the current fast pace of political activity, change, response and reaction.  But it’s not only the dynamics and scale of the issue(s) that has hindered me but also the horror, the increasingly unbelievable farce of it all. The first of my concerns - Finding Tory – may appear odd given that at one level the government and the impact of their policies and practices is everywhere.  But, shockingly much of what they are doing as in Whoops There Goes Our NHS etc. takes place quietly, sneakily, with little fanfare and (often) little reaction.

In my last post (Grief and Loss, Emotional and Material Concerns | Part Memoir, Part Rant) I wrote of the recently announced cuts to financial bereavement support and how these will significantly negatively impact on the lives of widowed parents with young children. In the last couple of days we have also heard from the Resolution Foundation who argue that by 2020 the inequality gap will be wider still and the living standards for the poorest half of households will be worse than since the early years of Margaret Thatcher’s 1979-90 government:

The prediction that inequality is set to start rising again is based on the thinktank’s forecast that while incomes will fall for the poorer half of households they will rise by about 5% for the richest fifth over the next four years.

The foundation blames the upcoming living standards squeeze on a combination of stagnating pay, rising inflation and the rollout of more than £12bn of welfare cuts. It emphasised that the pound’s weakness since the Brexit vote and other economic factors such as flat productivity growth were only part of the picture. The unequal nature of the squeeze would be the result of government policy on tax and benefits. https://www.theguardian.com/business/2017/jan/31/theresa-may-inequality-margaret-thatcher-resolution-foundation

Add to this the government plans to drastically cut 1 in 10 job centres (which will impact on and further increase the numbers of unemployed people); the suggestion that families need to take more responsibility for the care of the elderly (as a childless woman I might well be writing more about this in the future); the increase in homelessness, the fact that people with disabilities are having to crowdfund for essential equipment; the poor conditions (for all concerned) in prison and the rising number of deaths amongst those in custody . . . .

This frightening and long-reaching list of cuts, cuts, cuts, and the way they are both managed and reported, highlights a sad and seamless connection between 2016 and 2017. In December for example:

·        The government imposed a rise of £250 a year (applicable from autumn 2017) tuition fees. This will affect over half a million students. The increase was not announced, rather the information was put straight onto the gov.uk website.

·        The new Governance Code on Public Appointments gives government ministers greater power over who runs public bodies, including the BBC, Ofsted and the Care Quality Commission.

·        Despite increases in the number of children living in poverty the government has merged the Child Poverty Unit with the DWP.

For more detail on these, and other policies and practices that should concern us all, see Steve Topple’s piece here: http://www.thecanary.co/2017/01/03/enjoying-turkey-tories-repeatedly-stuffed-us/ Overall, as Mr Topple candidly puts it ‘While you were enjoying your turkey, the Tories repeatedly stuffed us all’. For anyone who wants to keep up to date with issues and experiences not being reported in the main stream media (MSM) it's definitely worth following Steve on @MrTopple.

Many of the Conservative government induced bad news stories that have hit the MSM have done so whilst we have been looking elsewhere. For the last couple of weeks the distraction has been both Brexit and Trump; what I’ve come to think of as BREXUMP. These issues are important not least because they expose other horrors. In the week after our PM Theresa May tells us that meeting President Trump is the biggest statement she can make about women’s equality and then hand-in-hand with said president ‘reassures’ us of US/UK special relationship it is both interesting and frightening to reflect on a couple of the Republican’s and the Conservatives’ newest policies. Early into his presidency Trump signed an executive order defunding any international development groups which give women or girls overseas advice on abortion and passed the Hyde Amendment (a clause that bans any federal money from helping to fund abortions) into law. Compare this to a development closer to home: whilst we were all focused on the new president’s inauguration the UK government pressed ahead with, amongst other things (see below), its previous proposal that women whose third child is born following a sexual assault should be forced to provide evidence of the rape or risk losing tax credits.

But not to worry for in her first speech of the year Theresa May assured us of her commitment to a ‘shared society’.  Reiterating points already made in her 2016 Conservative Conference Speech she spoke of ‘burning injustices’ and healing divisions between ‘a more prosperous older generation and a struggling younger generation’ and  ‘between the wealth of London and the rest of the country’ between the rich, the successful and the powerful, and their fellow (not so rich, successful or powerful) citizens.

Having all ridden on the Tory unmerry-go-round of ‘no such thing as society’ (Thatcher 1987); ‘classless society’ (Major 1991); ‘responsible society’ (Hauge 2001); and ‘big society’ (Cameron 2005) we have begun to reflect on this latest Tory soundbite. Not a shared society but a scared society or a shred society say some. To me, the examples above (plus the many others I could have cited including tax breaks for the highest earners whilst public section pay remains frozen: a reduction in spending on mental health services and more and more) suggest that secret society or sneaky society are much more appropriate descriptors.

The mounting evidence of secrets and lies concerning issues as wide ranging as knowledge of Trident misadventures and justice for Hillsburgh support such terms. As do the incredulous claims of ‘crisis what crisis’ and much evidence of absolute waffle, rather than straight talking. For an example, see this from a speech May delivered in's Trump's company:

There will be times when we disagree and issues on which we disagree.

If all of this is not enough to scare us about what might be next there's also the government’s support for plans to dictate who we can vote for (Labour seats are over-represented in proposed constituency boundary changes) and who can vote (only those with an ID card, only those who can speak English or Welsh) all whilst the Conservatives are under investigation for election fraud.

I am shocked over and over again that the murmurs of discontent aren't building to a cacophony of rage. OK, so apparently Amazon has sold out of copies of Orwell’s Nineteen Eight-Four (and there’s a clever meme of a battered copy of Twenty Seventeen doing the rounds) and more of us are active on our tablets and phones, even on the streets, in ways we haven’t been for a while, or ever. BUT, we all need to do more to expose the secrets and to fight for a society that’s safe for us all to live in. We need real change in society not visionary buzz phrases. I appreciate that it’s hard to keep on top of everything for increasingly it feels like a 24/7 task to cut through the rubbish and the noise. Within this maze of competing stories and racket of anxious and angry voices it’s comforting to find someone to blame. And the Right and many members of the so called ‘moderate’ Left, well supported by the MSM, have found their scapegoat. . . LOOK AT CORBYN, BLAME CORBYN they tell us. But before accepting the smears and perpetuating the negative views we should ALL ask why? Has this man spent his nearly three and a half decades as an MP feathering his own nest rather than fighting for his constituents and for others both at home and abroad?; has he argued for war and for cuts, rather than for peace and compassion?; did he promise us £350 million a week for the NHS if we voted to leave the EU?; did he orchestrate a leadership challenge so that we wasted a summer focused on internal Labour Party struggles when we should have been fighting the Tories? NO, NO, NO he did not. But he does sometimes stumble over his words a little and on occasion he has a problem with his collar and tie. What a bastard! 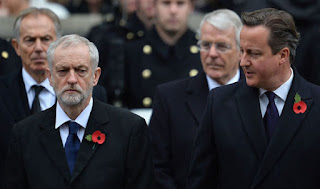 One of the most frustrating and frightening aspects of this particular distraction is that others on the Left cannot see, or do not care about, the hypocrisy of claiming that ‘we have more in common than that which divides us’ whilst at the same time engaging in very public personal, unconstructive attacks (on Corbyn and those that work closely with him or support him) often based on unproved or disproved ‘facts’. These people should know better. They (often) do know better. As my writing gets more critical I appreciate I’m flirting with a future LP suspension. So be it. More of us need to add our voices to others that are already speaking out about the irony of those that seem more intent on (re)gaining personal rather than governmental position and power whilst arguing that for the current leadership governmental power is impossible. Here I agree, as I often do, with Roger C. Thus: ‘Simple test, if you’re a labour MP and you’re not opposing the Tories then you’re not doing your job. If you’re a Labour MP and you’re attacking your own party you’re doing the Tories’ job’. http://www.prole-star.co.uk/single-post/2017/01/04/TheTruthIs. In fact I’d go a little further and add: . . . if you’re a Labour MP, or Labour Party member or supporter, and you’re attacking your own party you're doing the Tories job.

Whilst we continue to be encourage to look elsewhere the NHS is still in crisis. To add to the list of others who have been blamed (including the elderly, inappropriate A and E attendees, junior doctors, GPs) we have recently been told (again) that this is the fault of health tourists. Another lie for in reality this accounts for something between 0.25% and 0.50% of NHS spend. Theresa May insisted this week that our NHS is ‘not for sale’. And yet it seems that everyday we see more evidence to the contrary. The day of Trump’s inauguration was a busy day for the Tories as another of their actions was to advertise a contract valued at £515.0 million designed to recruit transport services to help ease mounting transport problems in the NHS. This includes public and private sector bodies even though previous such contracts have been unsuccessful in terms of reliability and regulation:

The Private Ambulance Service in Essex claims  that “all staff are trained to the relevant standards required”. But some staff told the BBC they only had an hour's training to drive using blue emergency lights.

In April 2016, The Guardian reported that “hundreds of patients [in south east England] including people with cancer and kidney failure… missed important appointments for treatment”. This was because the privately-run transport service was so unreliable. Some elderly patients waited more than five hours for an ambulance and many patients were left stranded at hospital due to [the] shambolic service. http://www.thecanary.co/2017/01/26/everyone-distracted-trump-uk-government-put-nhs-contract-worth-515m-sale/

We need to pay MORE attention to all this and to the many other examples of injustice and discrimination. We need to cut through the noise and challenge the misrepresentations. We need to take care not to get too distracted. We need to focus and we need to fight.