I am working on a few politically related pieces for this Blog (and elsewhere) at the moment. Not surprisingly I'm finding it difficult to keep up with the pace of events and concerns as day-by-day we see and hear more and more of the horrors of life in the twenty first century. For now, in this piece I'm keeping it simple and intend to focus on just one issue: death and bereavement.

I write about death and loss a lot, as a sociologist and in more personal pieces including memoir and fiction (see https://www.abctales.com/user/gletherby for some examples). In my adult life there has been significant loss. My father - Ron - died when I was 20 in 1979, I miscarried my only (to my knowledge) biological child in my mid-twenties and my second husband John died early in 2010 following years of physical and mental ill-health. Two years later the person who was my main support and source of comfort throughout all of these experiences – my mother, Dorothy – died. Other extended family members and close friends have died over the years and, as I've written previously, I feel as if I have become something of an expert in bereavement and grief. In 2015 I published an article in the journal Mortality in which I wrote:

I went to visit my mum and dad today. I took flowers. It's November and as I arrived in the village I was battered by rain and hail. No sea spray as the tide was well out.  My dad once walked with me along this road, worried that I might be swept away on my way to catch the college bus. Often we were drenched through to our underwear because of the windblown salty waves. Today the weather calmed during the short walk to the graveyard and as I was arranging the blooms a bright rainbow graced the horizon. The weak winter sun came out briefly and shone on the three of us. I took a photograph of the grave stone on the iPad on which I write my first draft of this piece. Although such photographs do not appear in family albums as regularly as pictures of high days and holidays, new babies and family groupings I feel sure I am not the only one to take and retain such images. *

I've just got back from a similar visit. Tomorrow (30th January) will be the fifth anniversary of my mum's death. She died on the eve of the 33rd anniversary of my dad's death. When planning her funeral I told the undertaker that I wanted to honour her wish to be buried in the same grave as my father; her husband. Luckily, the father of the man who dug my mum’s grave, himself of the same profession was a ‘deep digger’. If he hadn’t buried my father deep his son would have had to dig a new grave, elsewhere in the graveyard for my mum. My mum and I had just assumed that I would be able to fulfil her wishes and I know that most bereaved people are unaware of many of the expected and allowed procedures and protocols after death. These practical concerns add to the distress and feelings of helplessness. 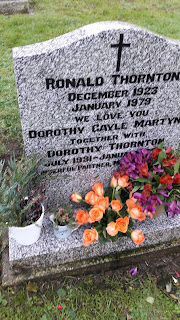 Here is the picture I took today.

Just as I don’t think of my graveyard photo collection as morbid, neither do I think my continued interest in death and loss is ghoulish. My parents, my husband, the child I never met have all shaped me as a person and continue to have an influence on my life choices, chances and experiences. Not long after my mum's death I watched the 2005 film In her Shoes. The following poem, usually (as in this movie) read at weddings made me cry as I thought how appropriate it was for my lasting relationships with my loved ones:
with me E. E. Cummings
The first four lines . . .
i carry your heart with me (i carry it in
my heart) i am never without it (anywhere
i go you go, my dear; and whatever is done
by only me is your doing, my darling) . . .


i carry your heart (i carry it in my heart).


Some of my work and associated writings clearly show their influence on my head as well as my heart. For many years I have researched and written about reproductive loss and disruption and more recently about loss and bereavement more generally. I have previously reflected on funeral poverty (see Stomach Churns and Chewed Nails | A Summer of Discomfort) and on homelessness and death (see Dead Famous, Famous Dead | Celebrity (and other) Deaths and Some Responses). Today on my return home I intended to work on another piece I am in the middle of. Before turning on my computer I checked my Twitter account and came across an article published earlier this morning - Young and bereaved – and now facing cuts to crucial financial support - https://www.theguardian.com/money/2017/jan/29/young-bereaved-cuts-to-financial-support-12000

The author informs us that:

The government revealed earlier this month how the current system of bereavement support payments will change in April in order, it says, to modernise the structures.

Widowed parents with young children will be the hardest hit as a likely 91% of parents will be supported for a shorter period of time than they would be currently. This means that a typical working family will lose out on more than £12,000, and a working parent with young children even more; £23,500 on average (see http://www.childhoodbereavementnetwork.org.uk/).

"We are really worried about these changes,” says spokeswoman Alison Penny. “We fear for the stress this will place on parents trying to support their grieving children.” The charity predicts widowed parents may need to increase their working hours before their children are actually ready for their parent to be less available. It expects this additional strain on families will have a significant negative impact on children’s lives, resulting in worse mental health and educational outcomes.

Additionally, the Conservative government has also confirmed that cohabiting unmarried couples, including those with children, will continue to be ineligible for any bereavement benefits. And this despite recommendations in 2016 by the work and pensions select committee to extend eligibility to ALL families.

Grief is hard work; for children and for adults. Dealing with the emotions it evokes, as well as the practicalities involved, is enough, more than enough, to cope with without having to worry also about how to pay for a funeral or to put food on the table or pay the rent. Shockingly, cohabiting widowed parents already have the additional concern of how to support their children whilst returning to work earlier following bereavement leave and working longer hours in order to pay the bills. Rather than righting this wrong the government is instead about to extend the worry further.

Remembering my mum and dad this evening I feel sad.

Thinking of those who will suffer as the result of the changes to financial bereavement support I feel angry. Very angry.

* Extract from: Letherby, G. (2015) ‘Bathwater, Babies and Other Losses: A Personal and Academic Story’ Mortality: Promoting the interdisciplinary study of death and dying 20(2): 128-144