The Present and the Future | The Need to Get Involved

The Samaritans have declared today as Brew Monday. They write:
Forget Blue Monday, we’re declaring 16 January ‘Brew Monday’ instead.
We’re turning the ‘the most depressing day of the year’ on its head by renaming the third Monday in January ‘Brew Monday’ and celebrating that great tradition of simply getting together to talk over a cup of tea (or coffee!)
Find out more at http://www.samaritans.org/media-centre/our-campaigns/brew-monday?gclid=Cj0KEQiA-_HDBRD2lomhoufc1JkBEiQA0TVMmsGon278wUf4-G1vBUs8gK-qRLnOJmX689N4fwdjGsgaAphy8P8HAQ OR #BrewMonday
Given that, despite repeated pronouncements suggesting the contrary, government spending on and support for mental health care is dismal, such initiatives are more than welcome. Add to this the plethora of evidence that the NHS is experiencing a crisis like never before, so much so that it’s future is more than fragile, whilst at the same time we here of more and more MPs who have business interests that will profit from a privatised NHS, and it is not surprising that #HuntMustGo trended all Thursday evening. Individuals continue to tweet with this hasstag along with #MayMustGo; #ToriesOut; #NHSCrisis; #SaveOurNHS and similar. There has been much, much critique of the governments’ handing of the situation from the political left and from those working in the NHS. There has also been a great deal of support, including much on social media, for nurses, doctors, paramedics and all of the other professionals allied to medicine who are continuing to just get on with their job, as they do every day. 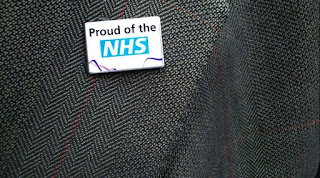 In the light of this, one of my incredulous concerns this morning, is just how some people, indeed anyone, can (as one opinion poll suggested yesterday) believe that the NHS is safer in the hands of the Conservatives than it would be under Labour. I hope, intend, to write further about the value or not of polls, about media bias and what some call post-truth, about life in a ‘shared society’. This morning though all my thoughts are consumed with what to do right now, how to help. I have been and remain inspired by others who debate, campaign, organise and write. Their work informs me and moves me to action.  In my writings, including this piece, I hope to add a little. This afternoon I’m attending a consultation meeting which will focus on challenging the potential negative impacts of the NHS Sustainability and Transformation Plan on local NHS services. This weekend I, with other Labour Party members, delivered leaflets about said meeting. It’s not that much but it’s something. We can all do something: protest; petition; educate ourselves and others; talk, talk, talk over coffee, or tea, at work, in the pub, via the internet. . .
In recent months my writings, on this blog and elsewhere, have become much more Political (having always, I think, been political). I am conscious that ‘talking politics’ isn’t always welcomed by some. So, when posting pieces I often ‘warn’ potential readers of the content. But, given that (in addition to the NHS crisis) a ‘hard’ Brexit will negatively impact on the life chances and experiences of students, workers, pensioners; that the eight richest men in the world are worth more than half the world’s population; that private companies outside of the UK now operate 70% of Britain’s railways and so on and so on I care less about what people think of me or my approach.
The constant distractions (by way of unfounded smears, tantrums and blustering, and false promises) from the alternative messages of hope and possibility provided by the government’s political opposition are powerful. Many of those who have power have a lot to lose and others who want power (whilst maintained the status quo) are sometimes unscrupulous in their quest for it.
I have written before about my feelings surrounding recent political events. I have written of distress, anxiety, hope and so on. What drives me to write today is fear; fear of what will happen to us, in the present and in the future, if we don’t all do what we can.
Posted by arwenackcerebrals at 02:30