All is not well in fairyland. 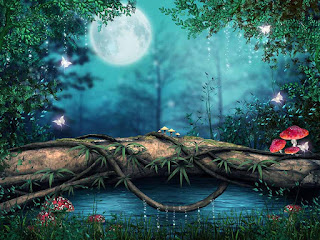 Eight years of austerity have taken its toll and life for many of us is much leaner and meaner. Our gossamer gowns are threadbare, our auras are dull. There is much less general merry-making and little enthusiasm for music and dancing, for frolicking and fun. The playing of pranks on, or granting of wishes to, non-magical others is almost unheard of. We are too busy just trying to get by. And yet, at the same time, deep in the woods - where only the few are allowed to go - the magic money tree continues to thrive, its bountiful fruit weighing the tree branches down. Add to this the latest news that Frexit in unlikely to lead to new and better trading deals. Rather, the likelihood of the need to stockpile pixie dust and toadstools is greater than ever it was during the difficult years of non-belief (ironically, referred to by some as the time of New Magic) or even when the Never-Never-Land coalition ruled over us. For a while now it has been clear to most of us (if it wasn’t before) that a break from the rest of the magical world is not going to be the liberation of fairyland that we were promised. So rather than ‘getting our forest back’ (it was never clear who from) and living in new and glorious shangri-la type freedom and splendour we will instead become (if left to the current negotiating team) more and more isolated from our long-time friends and elves. But still (irrespective of the cost) they argue: ‘it’s the will of the fairies and so we must do it’. Some are calling for a winged-folks’ vote on the final deal whist others believe that our only hope, our only chance of a better world, is a change of leadership. This latter group, of which I have to be honest and declare that I am one, believe that we need those in power to focus on the needs of the many – both at home and further afield – rather than the current leaders whose ‘charms’ and spells prioritise the few, creating a hostile environment for those who they see as different, as lesser, to them. We need a leader too who does not hide away from everyday fairyfolk, preferring to hold hands with the chief goblin of the free world. We need a leader who wants to meet and to talk and to listen and to work with us the ordinary tree-stump dwellers. A leader who will shake the magic money tree making fairyland a happier, more enchanted, place for all.

There is a growing social movement of folk coming together.

Together we are learning from each other. Learning, like fireside storytellers, of ways to challenge the long-time folklore that argues that some are more entitled and others undeserving. Learning, as woodland warriors, how best to protect ourselves from the world-wind of attacks to which we are increasingly subject. Learning, in imitation of twittering birds, of ways to spread widely - amongst the trees and across the winds - the messages of anti-austerity, of inclusion, of unity, of connections and solidarity across borders.

Together we are powerful.

Together we are magical.

Come on everyone say it: ‘I believe in fairies.’