Following my last writings on rough sleeping and homelessness
http://arwenackcerebrals.blogspot.co.uk/2018/02/baby-its-very-very-cold-outside.html and in response to an article on the front page of my local paper - Falmouth Packet - focusing on the need to ‘tackle anti-social behaviour by rough sleepers’ (which is reportedly upsetting both residents and tourists) I wrote the following letter which was published yesterday.

Reading the Packet’s article on ‘tackling rough sleepers’ in the town (14th February 2018) I find it shocking that the paper is not reporting on the other, many would say the real, side of the story. That is that under Conservative/Liberal Democrat Coalition and Conservative Governments the number of rough sleepers rose by 169% between 2010 and 2017; and number of households in temporary accommodation on 30th September 2017 had gone up by 65% since 31st December 2010. Furthermore, in the last week alone four rough sleepers have died (three of the streets, one in hospital); 19th February, Cardiff; 21st February, Milton Keynes (hospital); 22nd February, Edinburgh; 23rd February, Essex. The Labour Party are committed to ending rough sleeping and local Labour councillors are working on a strategy of support. Surely compassion and empathy alongside practical working solutions – with reference to rough sleeping and the conditions and experiences that cause it - should be our concern here.

***
Interesting that this should first be in print on the day that I am stranded in a Premier Inn in Helston just under 10 miles away from home; my journey from Coverack to Falmouth scuppered by a snow fall more than unusual for Cornwall. Some more thoughts written yesterday and today:

I wrote a letter for the paper,
They published it today.
Rough sleeping. Freezing temperatures. Death,
But still they blame and they shame.
‘It’s a lifestyle choice,’ we’re told,
‘There’s help if they need it,’ they cry. *
#shame

*This is not an exaggeration of some people’s views as I wrote about in Baby it's VERY, VERY Cold Outside http://arwenackcerebrals.blogspot.co.uk/2018/02/baby-its-very-very-cold-outside.html

A couple of weeks ago Pete Sinclair, a Spitting Image writer, reminded his twitter followers of this sketch he wrote ‘as a farewell tribute to Margaret Thatcher’. Watch it and see whether you agree with him, and with me, that it is even more relevant just now https://www.youtube.com/watch?v=Uo5DOGuFWQ4(link is external)

Today my own bit of drama,
Stranded. Less than ten miles from home.
One of many victims of the 'Beast from the East',
Buses stopped. Taxi stalled. No choice but to turn around.
‘I don’t know what to suggest,’ the driver says,
‘Shall I take you back to the bus station?’
#anxiety

As a non-driver I use public transport regularly. Now self-employed and, following my parents’ influence, a lover of a bit of travel adventure, I’m often on the bus, train, plane… So I’m not easily distressed by delays or worried when there is a change of plan. I must admit though I experienced a moment or two of anxiety and a feeling of abandonment at the taxi driver’s words. Thankfully I remembered the nearby, fairly new, Premier Inn and I asked him to drive me there and to please wait while I checked that there was a vacancy. He drives to the hotel. I pay him what I owe. He leaves! (Happily there was a free room, which I didn't find out until after he'd driven away).

Over the last 24 hours I’ve heard and read of many stories of support and rescue during this bad weather period and I’m sure there are many, many more examples than we will ever hear about. I’m thankful, very thankful, that my situation wasn’t as bad as it could have been.

I remember the new chain hotel,
Just outside the small market town.
At 11am I’ve already had enough of the day,
I’m more than grateful that there is a room.
The receptionist is also marooned,
Sharing an ‘adventure’ we bond.
#relief 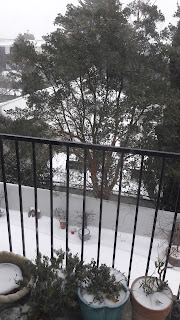 I had a small bag of perishables and the receptionist – who also had to stay the night as she couldn’t get home (she was still there when I left this morning) – put them in the hotel fridge for me. She also reassured me that there was plenty of room if I needed to stay another night. Enjoying a coffee and something hot to eat in the restaurant it became clear that the guests around me were also unable to travel any further. This morning a friend came to get me in his 4-wheel drive truck, ahead of the next round of extreme weather. We passed abandoned cars all the way home.  I’m writing this with the heating on and wrapped in my favourite purple blanket as the snow begins to fall again.

Lucky. Cosy and comfy with plenty to eat,
I’d have coped if 'Storm Emma' had arrived before time.
Whilst those still outside, last-night or long-term,
Fought for warmth and for life, I’d a bed and a bath and a kettle.
How do they sleep?
Those who think this is fine.
#shame

It’s encouraging to hear of charities, councils and places of worship providing emergency accommodation to rough sleepers
e.g. https://www.theguardian.com/society/2018/feb/27/emergency-shelters-opened-homeless-people-cold-hits-england
(link is external)
It’s also good that there is information available to all of us on how to help people (an estimated 9000 in Britain at the moment) living on the streets http://www.nme.com/blogs/nme-blogs/how-to-help-rough-sleepers-cold-weather-homeless-2250113(link is external)

And yet, there is so much more that could be done. Earlier in February Jeremy Corbyn MP tweeted:

@jeremycorbyn: Rough sleeping is an emergency that requires action now. I have written to @DavidGauke to ask him to allow the Holloway Prison former visitors' centre to be used as a homeless hostel. This building is just lying empty. It should be used to help people.

Mr Corbyn’s letter included the following: “I am writing to ask that you consider agreeing, in principle, to the temporary re-opening of the HMP Prison Holloway Visitor’s Centre so that it may be used as a homeless hostel.”

In response to this a Ministry of Justice spokesperson said: “The visitors’ centre at HMP Holloway is currently a key site for prison officer recruitment as we continue to increase staffing numbers. Regrettably therefore the centre is not vacant and is unable to be put to alternative use.”
https://www.mirror.co.uk/news/politics/jeremy-corbyn-calls-part-infamous-11978566
(link is external)
The need for such initiatives - and a more permanent solution to rough sleeping, homelessness more generally (which includes those in temporary accommodation) and complex associated issues and reasons -  is even more obvious when much of Britain is covered in snow. Furthermore, given that as of 2017 there were 14 million people living in poverty (over 1 in 5 of the population with 8 million families including at least one person in work), including 8 million working-age adults, 4 million children and 1.9 million pensioners there are far too many having to choose between heating and eating (reported by the Joseph Rowntree Organisation
https://www.jrf.org.uk/report/uk-poverty-2017?gclid=Cj0KCQiA5t7UBRDaARIsAOreQthHYre4Fi4dKEeSV1ns8kxaYfKdqo0rmn_FOVLU76_oA7nRjr2rQkoaAtbmEALw_wcB(link is external)).