The criticisms of Labour under the leadership of Jeremy Corbyn continue to be confused. The labour leader is, for example, at one and the same time too popular ('it's just a creepy cult') and not popular enough ('doesn't appeal beyond his adoring fans'). One way to look at, and challenge, such critique is through a focus on creativity. That the Labour Party Conference 2017, and many of its fringe events, has a more energetic feel than ever before few dispute but the atmosphere this promotes is still devalued, scorned even, by some.

Any yet, even those who dismiss the growing momentum (pun intended) as noise and distraction from real political concerns attempt to copy it. Enter 'Tory Glastonbury' with the Conservative MP George Freeman asking 'why is it the left who have all the fun in politics? The event - The Big Tent Ideas Festival - took place last week and was agreed by all, including the main organiser to be a flop with 'too many men and not enough music'  https://politicalscrapbook.net/2017/09/too-many-men-and-not-enough-music-tory-glastonbury-founder-admits-festival-is-a-flop/ 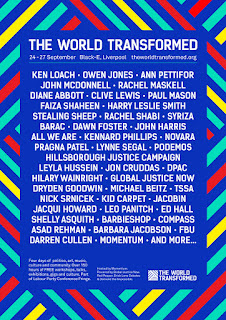 Conversely, The World Transformed, backed by Momentum, and a significant part of the Labour Party Conference Fringe, represents, many suggest, both a response to a cultural shift in politics and an engine for further change via the doorstep, the internet and beyond... http://www.independent.co.uk/voices/momentum-labour-jeremy-corbyn-the-world-transformed-festival-young-people-a7964151.html

Two years ago, at his first conference as leader, Mr Cobyn said '...you don't have to live without power and hope. Things can and will change.' This year, referring to Labour's GE 2017 campaign he added '...we offered an antidote to apathy and despair. Now Labour can and will deliver a Britain for the many not the few'. During the election the Conservatives focused on the so-called strength and stability (!) of Theresa May (although a little less so as the campaign continued and this proved to be a bad call). Ironically, given the critique of the so-called Corbyn personality cult whilst Mrs May talked of 'I' and 'me' Mr Corbyn's focus was, and is, 'us' and 'you'.  During his 2017 conference speak Jeremy Corbyn spoke of the two stars of the election campaign: the manifesto (full of policies that polls increasingly show that most people support) and all those members, activists and politicians who worked hard to canvass (in various ways) support for said manifesto.

So what's this got to do with creativity? Well; as Annette Blum writes in an article focusing on the relationship between creativity and activism:

Artistic projects of all kinds are so much a part of the fabric of our society/culture and continue to be tremendously inspirational, carrying a strong message and having the ability to resonate with large audiences no matter what the medium.

Blum continues:
The intersection of arts and political activism are two fields defined by a shared focus of creating engagement that shifts boundaries, changes relationships and creates new paradigms. Both activist and artist work in the challenges of the unknown and the unpredictable, never truly able to determine the outcome and forever questioning if there is more to be done. This experimentation also forms the essence of what can be the engine of success and motivation towards true change whether we are immersed in a specific social cause or a global peace movement, composing an original score, sharing a story by means of carving a sculpture, or using performance to highlight a critical message.

I especially love this next sentence:

Whatever our chosen palette, the practice of understanding the importance of our own creative engagement is a source of potential change on its own, and a space where valuable insight can be found through reflection and sharing.
http://www.huffingtonpost.com/annette-blum/art-and-politicsthe-power_b_9511384.html

I'll write more about that, and about political debates on creative opportunities for all, or not, another day ... For now though I'm focusing (if only briefly) on how artists off all types are using their talents to represent and support the Left. If for a while, as some suggest, the positive relationship between left leaning politics and art(ists) became a little shaky this is certainly not the case now. See this from 2016:

Yesterday, I wrote a blog about the Jeremy Corbyn tour - known as #JC4PM - which the media has failed to cover. I wanted people to know about the existence of the tour but I also wanted to alert people to the fact that none of the newspapers I contacted were interested in reporting it. Journalist after journalist told me that the story was 'not newsworthy'.

The #JC4PM tour was drawn up in the same spirit as the rallies that were organised by local activists during Jeremy Corbyn's [2015] leadership campaign. It was spontaneous. Comedians, musicians, poets and political activists were all enthusiastic about putting on big shows to show solidarity with Corbyn and to rally the troops in the same way as he had last summer. We were not asked to do this by the Labour Party - or even by Jeremy Corbyn's office. It was something we drew up together. http://www.independent.co.uk/voices/the-jeremy-corbyn-story-that-nobody-wanted-to-publish-a6848651.html

[Stand Up for Labour/#JC4PM tour are currently crowdfunding to enable further tours. Here is the link http://www.crowdfunder.co.uk/a-tour-for-stand-up-for-labour/]

It would, of course, be hard for the media to ignore such support for the Labour Party and the Labour Party leader now and added to this is the involvement of many more than just a famous few in an energetic mix of politics and practice: or praxis as we might call it:

Thousands of people descended on Brighton at the weekend for the World Transformed (TWT), Momentum's alternative fringe festival that ran alongside the official Labour party conference.

Events were scheduled to span four days in nine venues including bars and clubs. They included panel discussions on topics ranging from the importance of the arts to BAME representation, workshops on how to make viral videos or win a marginal seat, late-night gigs and DJ sets, film screenings during a session called 'revolution and chill', a pub quiz hosted by Ed Miliband, and live interviews with special guests in the style of Channel 4's TFI Friday....

The venues were filled with political graffiti and exhibitions to embolden critical thinking. Many visitors spoke with renewed confidence in modern politics and the power of Jeremy Corbyn's Labour to transform democracy as we know it. The mood was festive. . https://www.theguardian.com/politics/2017/sep/25/people-are-using-the-word-socialism-momentum-activists-hail-a-world-transformed

Conference over there is more to come. In just a few days, alongside the 2017 Conservative Party Conference the Take Back Manchester Festival 2017 will include cultural events, comedy, music and public meetings, in addition to demonstrations and rallies. For more detail see http://www.thepeoplesassembly.org.uk/events

This event on the 4th October looks especially interesting:

To extend a well-know song title 'If I can't dance, sing, laugh, paint, play pots and pans etc, and so on .... I don't want to be part of your revolution.'