A Tale of Two Campaigns | #GE2017 and some of its legacies 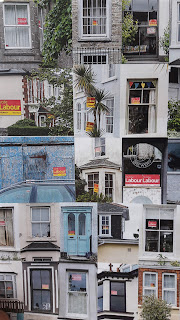 In the weeks leading up to the general election on June 8th the streets of my home town, Falmouth, were festooned with 'Vote Labour' posters. On the day there were approximately 300 activists on the streets of the Truro and Falmouth constituency. We walked, rode in cars, on bikes and even on a tractor. The mood was optimistic and the camaraderie enriching, as were many of the doorstop conversations, the waves from people of all ages and car toots of support. I was up early on Thursday the 8th to finish my notes for two hours of teaching in Exeter the next day. After going to the local polling station to vote myself I spent seven hours or so working for the campaign. Back home by mid evening the wait for the exit poll seemed interminable. When it came I knew that there would be no sleep for me that night. Nevertheless, the eight hour round trip to Exeter plus the lecture/workshop did not feel like too much of an effort; the adrenaline was what kept me going I’m sure. Truro and Falmouth (one of the last constituencies to declare) stayed blue BUT Labour increased its vote share from 14% in 2015 to 37.7% in 2017; the second biggest swing to Labour nationally. Next time. . . 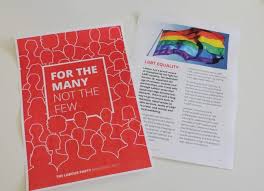 As I have written previously (see for example http://arwenackcerebrals.blogspot.co.uk/2017/06/whats-being-nice-or-nasty-got-to-do.html and http://arwenackcerebrals.blogspot.co.uk/2017/05/what-have-love-and-hate-got-to-do-with.html) all in the all the Labour campaign, For the Many, Not the Few, both locally and nationally, was full of detail, positivity, energy, and hope; lots of hope, for a better future for all. The Labour leader himself appeared at 90 events; many of which were attended by hundreds or thousands of people. The shadow cabinet, Labour MP candidates, celebrities and other supporters talked, wrote, sang, canvassed, shared (in persona and online) positive messages and more in a gloriously public and open campaign which, if not always represented in full by the mainstream media, was evident in all its splendour to anyone with even a cursory interest in social media. 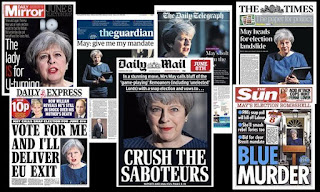 By contrast the Conservative Party played up to the politics of fear and hate in their skimpy, U-turn filled campaign, which supported by many media outlets, was more often than not conducted in private, at invite only events. Hubris, vanity and arrogance are all words that have been used to describe the attitude of the Prime Minister, her advisers and ministers with reference to the calling of the election and the operation of the campaign. This conceit, this sense of entitlement, did not however stop Mrs May and others taking every possible opportunity to smear the opposition (especially Jeremy Corbyn and those parliamentary colleagues most close to him), mislead (I'm being generous here) the electorate in terms of their own attitudes and policies (or lack of them) and those of the other parties. Sometimes it was difficult to comprehend the (and I'm using the following phrase deliberately) line of attack. Who thought that this - easily proved untrue by a quick glance at the Labour Party Manifesto - was a good idea I wonder: 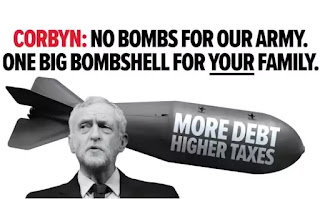 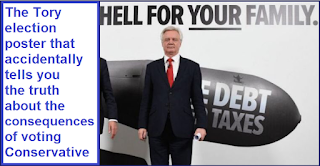 Not least because it was so easy to do this →→

And yet, despite an obvious rocky campaign, Theresa May and others continued to tell us again and again that only she could offer a 'strong and stable' government and Brexit deal, in contrast to a weak 'coalition of chaos' headed by Jeremy Corbyn. We were told also that the offers by Labour - for example to properly fund the NHS, to increase the number of public sector workers, to provide free school lunches for all primary school children and abolish university tuition fees - were fantasy. As Theresa May herself said to a question from a nurse concerning public sector pay rates: 'There isn't a magic money tree we can shake that suddenly provides for everything people want'. And if all the unwarranted attacks and the lies (there, I've said it) were not enough it seems that the Conservatives may have broken the law during the campaign in an attempt to secure more votes https://www.channel4.com/news/revealed-inside-the-secretive-tory-election-call-centre Now where and when have we heard that before?

Right up until polling day Labour and the Conservative continued with their differential approach. The Tories, supported by publications such at The Mail, The Sun and others continued with an 'attack dog' style that left many feeling sick and angry whilst the Labour Party's final broadcast (available on the YouTube Official Jeremy Corbyn Channel) evoked very different emotions. I've watched it half a dozen times now and it still makes me cry a little:  https://www.youtube.com/watch?v=SeuH7FG9mSA

Nineteen days on from the general election and a deal - described by many as shabby, grubby, irresponsible - was made between the Conservatives and the DUP which costs the tax payer 1.5 billion (in the first instance) prompting Emily Thornbury MP, in reference to the magic money tree, to ask 'have they found the key to the secret garden?' @LabourLeft has similarly revisited some of the Tory attack lines over the last couple of months. Thus: 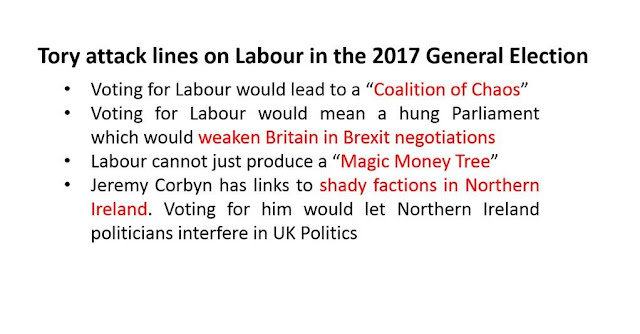 Rather than increasing her mandate at home and abroad, and rather than assuring anyone of her strength and stability the Prime Minister appears more weak and wobbly than ever before. The general election, which no Conservative MP will (publicly at least) admit was a mistake for them, has led to, in very many ways, increased insecurity for all of us. So, despite Mrs May's, now infamous admission, that the 'naughtiest' thing she has ever done is 'run through fields of wheat' as a child we can only hope that many more people are becoming aware, if they were not before, of the plethora of other actions, deals and decisions that are far, far worse.

So what of Labour? The increased power of the Party is evident in terms of the increased number of MPs; a 40% share of the vote (a rise of 9.6% since 2015 and the largest increase in a single election since 1945) and the dramatic change in the polls which now put both Labour and the Corbyn ahead of the Conservatives and May. At home and abroad there has been some change in the mainstream media, although the smears and untruths continue (more of that another time). If you haven't yet read 'The Book of Jeremy Corbyn' published in The New Yorker on the 9th June please do; bound to make you smile http://www.newyorker.com/news/daily-comment/the-book-of-jeremy-corbyn

And although I agree with those that say 'it's a movement not a man' I also strongly support the view, voiced recently by Alex Nunn (worthy winner of the Bread and Roses Award for his book The Candidate: Jeremy Corbyn's improbable path to power), 'without @jeremycorbyn's endurance it'd have been neither'. So, whilst we watch with horror the continued focus on the few by the government, and remain on general election alert, let's carry on working for positive change for the many and be encouraged by the continued and growing support for this endeavour. For not only is the Labour Leader's name chanted at music festivals, cricket matches, and in school playgrounds (which is clearly unnerving some; just one example here with a blatant lie at the end of Johnson's speech https://www.thecanary.co/2017/06/27/boris-johnson-finally-loses-claims-corbyn-supporters-part-brainwashed-cult-video/); not only are Corbyn and Jeremy gaining popularity as birth names but there is even a politically appropriate sandwich for those of us on the left. As the Unknown Stuntsman - @ustuntman - tweeted recently from a cafe in York: 'look what's on the menu: Ladies and Gentlemen THE CORBYN': 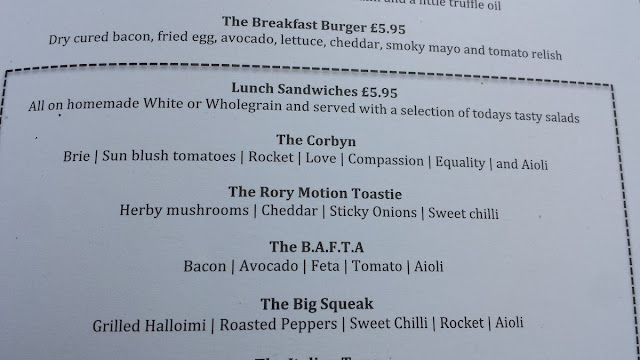 Sounds good to me.
Posted by arwenackcerebrals at 09:35