#Crisps4Lent | The importance (and power) of protest

Apparently it is important for us to know that the prime minister Theresa May has given up crisps for Lent; which runs this year from the 1st March to the 15th April. This is not the first time that the mainstream media have revealed details about the PMs religious beliefs. In November last year The Independent reported on an interview with her in which she stated: 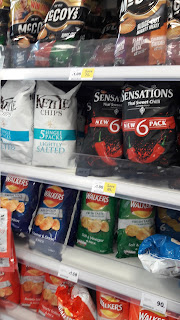 I suppose there is something in terms of faith.
I am a practising member of the Church of England . . .  that lies behind what I do.
http://www.independent.co.uk/news/uk/politics/theresa-may-reveals-how-her-faith-in-god-makes-her-certain-she-is-doing-the-right-thing-a7442616.html

Anyone who follows parliamentary debate and government decision making and policy development will likely reflect with incredulity on this statement. With specific reference to May's Lent sacrifice I feel sure very many of us agree with Giles Fraser (a Church of England priest, broadcaster and journalist) who argues:

... in our topsy-turvy society where rich people aspire to be pencil-thin and poor people are abused for being fat, giving up crisps or chocolate is usually more about aesthetic self-regard than it is about reminding yourself of your existential fragility. Moreover, in an age when austerity is ideologically imposed on the poor the idea of giving up crisps as being something virtuous cooperates with the rightwing philosophy that austerity is morally advantageous for the poor themselves.

To add insult to irony Fraser reminds us that a number of others have publicly declared their boycotting of Walker's crisps because of Gary Lineker's support for refugees. He continues:

Lent is a 40-day course in other-centredness - seeking to put others before oneself. . . . It's about recognising our own fundamental vulnerabilities, and being attentive to the vulnerabilities of others, especially those with nothing. So my friendly, priestly, pastoral advice to the prime minister would be to forget about the crisps. Doing without your regular salt-and-vinegar fix won't really bring you closer to God. But changing your mind about the Dubs refugees really will.
https://www.theguardian.com/commentisfree/2017/mar/01/priestly-advice-theresa-may-crisps-lent-dubs-refugees

Despite this, a petition signed by approximately 50,000 people and strongly worded advice from a number of charities, last Tuesday (7th March) the Conservative government voted down a plan that would have reversed the closing down of the Dubs Scheme by the government earlier this year. (The Dubs Amendment was designed by Labour peer and former refugee Lord Dubs aimed to help 3,000 of the estimated 90,000 unaccompanied migrant children across Europe). Add to this, in the same week, a budget that will, as has widely been agreed, benefit those that already have much, much more than those that do not; a reported mass deportation of asylum seekers and more and more evidence, despite the PMs denial, suggesting that Surrey council has negotiated a 'sweetheart deal'  in terms of social care funding.
http://www.organizedrage.com/2017/03/corruption-lies-and-cover-ups-surrey.html

One response to the issues raised here, plus the myriad of others that concern many of us, is to protest. My last bit of writing for this Blog followed the #NHSMarch on the 4th March
http://arwenackcerebrals.blogspot.co.uk/2017/03/whose-nhs-our-nhs-personal-response-to.html. In it I wrote about some of the immediate responses criticising protest as ineffectual, as pointless. Since then there have been many historical and current examples given proving just the opposite. Whether through written or performed pieces (on paper or via social media); through withdrawing labour or refusing to cross picket lines; whether marching in the streets, sitting in buildings and so on and so forth protest can and has made a difference. Such activity not only highlights real concerns and shifts in ideological thinking it brings people together in demonstration for themselves and in support of others, results in raised consciousness and can lead to positive workplace changes and government U-turns. Individual, and group, actions may be one-off protests or may lead to further action and activity and/or be part of something bigger across local, national and global boundaries.

I write this on a day when protesters gave speeches and made noise outside of the Home Office for #OrgreaveJustice; continued the fight to #keeptheguardonthetrain* and are now gathering in Parliament Square for an emergency protest to Defend EU Citizen's Right to Remain (#RightToRemain). Just a couple more examples here, both with one particular anniversary in mind. As the Chancellor Philip Hammond MP delivered his budget speech on the 8th March, which also happened to be International Women's Day, the Women Against State Pension Inequality (WASPI) campaign group were just outside the building, listen:  https://www.youtube.com/watch?v=hvQYLZkwzmA. And here is a speech by Lyn Brown MP, re-posted by several last week, again with International Women's Day in mind: https://www.youtube.com/watch?v=TWCecSnHUNo

Protest of all kinds can help the protester to feel involved, to feel useful, to feel empowered and yet it can also lead to increased frustration when there seems to be little, or not enough, change. Part of the concern for many is the feeling of not doing enough. I experience this on almost a daily basis. Around work and other commitments I do what I can: talking, writing, protesting, canvasing. But. . . .

As an agnostic (explanation for this too long, and distracting for here) I don't observe Lent. Although I do applaud the seeking to put others before oneself aspect. Despite much evidence of cruelty and inequality I see enough individuals (from many faiths and none) doing just this (putting others before themselves) to keep me going. This and the camaraderie, support and friendship of others helps a lot.

Protest is a serious business motivated as it is by injustice and protesting often includes emotional, material and physical risk. The last thing I want to do is trivialise such endeavours. But boosted by the evidence that protest can also be fun (watch and listen to the WASPI women again or to the many others who protest through music, comedy, poetry and visual art) I decided last Wednesday that it can also be tasty. Whilst 'talking politics' with a group of friends at work I thought of another small something I can do, another small protest I can make: that every day until the end of Lent I will eat crisps. I began this particular personal protest immediately and shared a packet of cheese flavoured ones with my friend Tracey (I have her permission to post this photo) and I've managed at least a handful of various varieties and types each day since.

At a time when I often feel distressed and overwhelmed by the state we are in this small bit of disruption makes me smile.

Why not join me #Crisps4Lent.

* I have written elsewhere about specific issues affecting the railways, railway workers and passengers see http://www.truroandfalmouthlabour.org/gravy_trains_strikes_tickets_to_ride