The Twelve Days of Christmas | The 2016 version

On the first day of Christmas my true love gave to me a partridge in a pear tree.
A somewhat unusual present I’m sure you’ll agree,
but apparently this was all that was left after the Black Friday rush.

On the second day of Christmas my true love gave to me two turtle doves.
Symbolic of peace the doves represent a concept and ideal we definitely need to focus on just now;
both at home and further afield.
With the ‘politics of hate’
seemingly dominant on the streets
and in much of the main stream media,
more emphasis on peace, tolerance and kindness
as strengths rather than weaknesses
would be especially welcome. 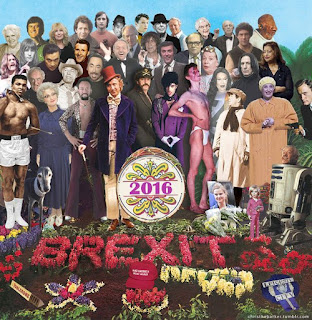 On the third day of Christmas my true love gave to me three French hens.
A valuable gift for two reasons.
First, the hens will probably cost very much more soon given that 'Brexit means Brexit'.
Second, at least we can be guaranteed eggs,
even if,
fish fingers,
Marmite,
Toberlone,
and goodness knows what else,
are no longer available.

On the fourth day of Christmas my true love gave to me four calling birds.
Following his successful campaign
the present elect of the United States of America
telephoned rather more than four world leaders,
before the prime minister of the small group of islands,
4,242 miles away,
with whom the USA has a long standing ‘special relationship’.
Not to worry for he remains great friends,
and shares a desire to make his country ‘great again’,
with a Britain (for now) based  like-minded other
who is currently being given much more attention and air time than is sensible.
Enough already.

On the fifth day of Christmas my true love gave to me FIVE GOLD RINGS.
A reminder of a summer of achievement.
To cheer the soul during a year of disappointment,
disruption,
and grief,
many of us tuned in to the coverage of the Olympics.
On one level a wonderful celebration of diversity,
with huge support for all athletes irrespective of
sex,
sexuality,
age,
social class,
ethnicity and dis/ability.
And yet there are divisions;
(not least in that the Paralympics received less financial support and less coverage than the 'main' event a month earlier)
and expectations;
(woe betide anyone who doesn’t show the appropriate level of patriotic pride during their country’s national anthem)
for those who compete.
And as ever during such an event stark local inequality was highlighted:

"Rio's plan, in hosting the Olympics, was to get the city on the world stage, attracting tourism and investment . . . With almost no effort, Rio stands out from most cities around the world. Who else has scenery and a percussive cultural mix like ours?

Now if we'd just managed to produce better sanitation, income distribution, housing, public safety, an integrated and efficient transportation system, public health and education ...The focus on marketing -- instead of our reality -- is why many locals aren't exactly psyched for the Olympic Games." http://edition.cnn.com/2016/07/29/sport/olympics-2016-venues-rio-brazil-russia-ban-zika/

On the sixth day of Christmas my true love gave to me six geese a laying.
What were they laying I wondered;
certainly not the golden egg for anyone not a member of the 1%.
Austerity isn't working for almost everyone -
who needs an education,
who gets sick on occasion,
who wants to keep warm and dry and eat well,
who is growing older . . .
There is a gender difference here too,
as several reports tell us that austerity affects women twice as hard as men.
Furthermore,
it seems that Black and Minority Ethic (BME) women are likely to be even more disadvantaged.
What’s good for the goose is clearly even better (if only a bit) for the gander.
And yet the pressures on men are significant also as evidenced by frighteningly high and increasing suicide rates.

On the seventh day of Christmas my true love gave to me seven swans a swimming.
By now my home is overrun with poultry,
and by rights my true love was a tad foolish imparting this particular present,
given that unmarked swans by prerogative right belong to the British Crown.
So asking for a gift note
I returned the bevy of swans to their rightful owner.
I hope they are able to cope with the noise of the,
recently announced,
refurbishment of their keeper’s (sometime) place of residence.
The renovations will be paid for with taxpayers’ money.
All the queen's men and women are fine with this.
If we lived in a society where benefit reduction was imposed on many in social housing who are deemed to have a 'spare' bedroom;
if we lived in a society where child homelessness was the highest it has been for nearly a decade;
if we lived in a society where a man sleeping rough died on the same day that the charity Shelter reached its 50th birthday;
then maybe we wouldn't be quite so supportive of this particular DIY SOS.

On the eight day of Christmas my true love gave to me eight maids a milking.
In the year when the Oxford Dictionaries' 'Word of the Year' is,
post-truth,
it is difficult to decide who deserves the prize for -
'milking it' the most.
When a politician’s dress and shoe sense
is more important than her or his policies;
when the facts about the value of immigration
are ignored in favour of xenophobia to deflect attention from a failing governmental agenda;
when it's hard to tell whether the 'news' item we read or hear about is reality or satire,
I'm sure you are wondering if my reference to eight maids,
(along with the rest of my festive booty),
is itself a piece of 'fake' news.

On the ninth day of Christmas my true love gave to me nine ladies dancing.
Makes a change from cavorting ex-shadow chancellors.
Great balls of fire indeed.

On the tenth day of Christmas my true love gave to me ten lords a leaping.
Rather excitable this lot.
All new to The House of Lords, (along with a few others),
they have to fight for seats given the increase in numbers in recent years.
And to think it's being suggested that the number of MPs in The House of Commons, (affecting all politics parties but the Labour Party the most),
be reduced.
Inevitably all the jumping about led to a nasty accident or two,
necessitating a long afternoon sitting in A and E,
whilst overstretched and tired looking doctors and nurses rushed around us.
On leaving the hospital I signed a petition,
calling on the government to give the NHS the funding it needs.
You can find it at #CarefortheNHS

On the eleventh day of Christmas my true love gave to me eleven pipers piping.
In remembrance of those in the public eye that died this year, including:
Alan Rickman,
Victoria Wood,
David Bowie,
Lennard Cohen,
Ronnie Corbett,
Caroline Aherne,
Andrew Sachs,
Carla Lane,
Prince,
Terry Wogan,
Robert Vaughn . . .
(and more, too many more).

On the twelfth day of Christmas my true love gave to me twelve drummers drumming.
As we listen to the beat accompanying us out of a year we would rather forget,
the very best we should hope for,
I think,
is that in 2017,
we will begin to appreciate,
as the late Jo Cox MP,
said as part of her maiden speech:
'that we are far more united and have far more in common with each other than things that divide us'.