Dead Famous, Famous Dead | Celebrity (and other) Deaths and Some Responses

A few months ago I almost bumped into my latest celebrity crush at Birmingham New Street railway station. I’ll not give the name. Far too embarrassing. But by way of a clue or two he’s a thespian known for radio drama as well as a presence on TV, and in at least two roles plays a character with a medical degree. . . It’s a thrill to see or meet someone whose work you admire, whether or not they do a similar job to you, or you ‘know’ them only through their on screen, stage, literary (or similar) performance(s). I’m always touched when well-known people speak of being star-struck on encountering or working with their own idols; evidence of how we all look to others for example and likely all, however lowly we consider ourselves, provide inspiration to others.

Because stories (of all kinds), music and other creative outputs affect us emotionally as well as cerebrally it’s not surprisingly that when an actor, singer, comedian, writer dies there is a certain amount (related of course to the fame and popularity (or opposite) of the deceased) of public as well as private grief. This year there has been a plethora of celebrity deaths with the baby-boomer generation, the rise of ‘celebrity’, and the easier access both to 24/7 news and public mourning, via the internet and social media, all being cited as possible reasons for both the rise of and responses to these events. 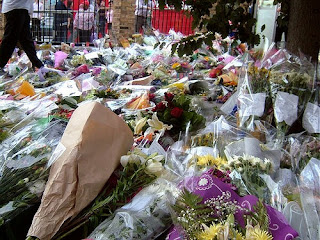 In reflecting on my own reactions to some of this year's losses I acknowledged (in a shorter version of this piece that I wrote in May) that whilst I had a good deal of sympathy for Ronnie Corbett’s family, agreed with others that Prince was taken too soon, felt sadness at the loss of Terry Wogan’s wit and David Bowie’s music I experienced significant grief following the deaths of Alan Rickman and Victoria Wood. Having re-watched the Barchester Chronicles and Robin Hood Prince of Thieves (saving Madly Deeply for when I felt stronger) and gobbled up the television tributes to Ms Wood plus various YouTube versions of sketches she wrote and/or starred in I felt sadder still that there will be no further creations from either of them. Just as sometimes it feels impossible, despite my acceptance of the opposite, that I’ll never, see, touch or talk to my deceased loved ones again, it feels incongruous that Wood won’t write another funny, insightful song or Rickman won’t sneer or smile in that sexy way that no other actor can get close to. And whilst I don’t believe I’m the victim of what some might call 'pathological fandom' I do feel that these individuals, although I never met them, where important to me. They made me laugh and cry, they entertained me and gave me pause for thought, I respected and took pleasure from their achievements and felt some connection to their humour and aspects of their politics. Since my first musings on this phenomenon there have been additional deaths with, in just the last week, Liz Smith, Carrie Fisher, Debbie Richards and George Michael being added to a list which also includes Caroline Aherne, Mohammad Ali, Leonard Cohen, and more, many more. Tributes and detail on the professional, political and personal influence of these and other celebrities who have died this year continue to be produced and broadcast.

There are of course examples of people who have died this year whose influence has been significant in the arts who are less well known, less widely mourned. So whereas the work of author Richard Adams may be remembered by many, that of 25 year old Max Ritvo, a poet who wrote about his experience of living with cancer, is less likely to be. And, in other areas; despite the value of their work Dr. Donald Ainslee (D. A.) Henderson who led the successful effort to eradicate smallpox and Vera Rubin, the astronomer whose work helped establish the unsuspected existence of dark matter, are hardly household names. Sadly, most of us likely know more about the life and work of Jo Cox MP, than we would had she not been murdered in June this year.

Paraphrasing a social media post I read recently: ‘although most of us won’t trend on twitter when we die’ we all have some impact, some influence. When my husband John died in 2010 I received a number of letters from people (some of whom I had never met) that, in his job as a lecturer he had supported, influenced, inspired. Similarly following my mum’s death in 2012 several friends, including several I had not heard from for more than 30 years, spoke or wrote to me about the kindness and humour of my parents (my father died in 1979), highlighting their positive presence in the lives of young people other than me, their only child. Evidence of the importance of those of us who live ordinary lives in terms of legacy on the lives of others.

But what of Michael McCluskey, and others like him, who this year have died whilst living on the streets. Michael, in his late 40s, was known to many of the volunteers who work with the homeless in Medway, Kent and according to newspaper articles was a father and grandfather and a West Ham supporter. He was found dead in the high street on Christmas Eve and floral tributes were left in his memory.  A couple of months earlier in October about 100 people attended the funeral of Neil Dearden, who died in hospital but was previously living rough in Rochdale. The funeral was paid for by the £6,000 raised on a crowdfunding page set up by Mohammed Yousaf. Motivated to give Neil the ‘funeral he deserved’ Yousaf, a local business man, said: ‘Neil wasn’t a straightforward guy and had problems, but he was a wonderful guy and never harmed anyone. He was a true legend and a bit of a celebrity in the area.’

My life, like the lives of many others, has been enriched and enhanced, by the life and work of many of the famous, and not so famous, folk who have died this year, likely by some in ways I/we will never appreciate. The lives and deaths of McCluskey and Dearden are significant too and not only to those who knew and cared for them. In the UK the cost of a funeral in 2016 is more than double what it was in 2004 and homelessness (including those sleeping rough, squatters, sofa surfers, and those living in hostels and bed and breakfast accommodation) is clearly a crisis. In such a society the deaths of homeless people, with little fame and no fortune, and the responses to them, deserve as much, if not more of a reaction, as those of the more acclaimed and immortalised.  We should all, and here I include the political ‘elite’, the mainstream media, and each and every one of us, take note. With 2017 just a couple of days away one our hopes for the new year should be that Michael McCluskey and Neil Dearden, and others like them, did not die in vain.