Bless Us Everyone | Tales of Halloween Past, Present and Future

A story for Halloween written with apologies (and thanks for the quotes in italics) to Charles Dickens.

Last night I had the strangest dream. 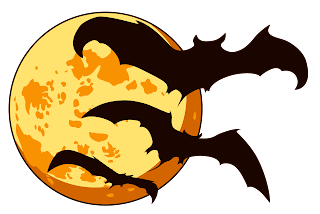 It was All Hallows Eve so perhaps not surprisingly there were ghosts involved. Usually I sleep undisturbed so can only put the dreaming down to the especially tasty piece of rich Stilton that accompanied my port following my lunchtime steak pudding and treacle tart and custard. The Members Dining Room at the House does a great range of nosh and I dine there frequently. I was back in my seat just in time to vote against the latest suggested hike in disability benefits. Well the incentives to work really do need to be clear don't you think?

So anyway, I'm asleep - not just in reality but in the dream itself  - and I'm woken by a large, but somewhat translucent, bloke, standing at the foot of the bed and introducing himself as the ghost of Halloween past. I know, I know, unbelievable tosh but bear with me it's a strangely entertaining tale.

The ghost's aim, so he said, was to remind me of Halloween back in the day. I'd forgotten what fun my twin brother and I had curled up with mum under the bed sheets telling scary stories and making spooky shapes on the wall with our torches. Dad was usually at work in the pub, following his day job at the docks. The games stopped when we moved up from primary; me to the grammar and Paul to the secondary modern. Things were never the same between us after that. He still lives close to mum, who's a widow following dad's early death, which is good because I'm too busy to get down much. I offer to help financially but they both shun my generousity. Stupid, really stupid. After all I've got enough. I claim more in expenses than Paul earns in a year. There's a rumour going round that there are going to be some restrictions on what we request in future. Bah, humbug, I say. We work hard enough, surely nobody could begrudge us.

The next thing I know I'm being woken from another deep slumber by a second apparition, this time promising me an insight into the most significant events in the All Saints' Eve of the moment. It's another large one, this time with a huge orange head that looks rather like a hairy pumpkin. He seems to have come with a warning and repeats over and over: 'It doesn't matter what you do or who you do it to just be careful which email server you use'. Very odd. More than ever I'm convinced now that this experience must be diet related; may be an undigested bit of beef, a blot of mustard, a crumb of cheese, a fragment of underdone potato.

The final visitor - this time  a vampire type, terrifying and yet seductive - arrives some time later. I'm getting fed up now as I've another full day tomorrow including a couple of crucial business meetings and a supper date in the city. The focus of this vision is Halloweens to come and before I know it we are in the centre of my constituency. We pass the local NHS hospital although it appears derelict with boarded up windows and doors. The high street is somewhat changed too with every other property either a food or clothes bank. Spoils the look of the place rather and surely not necessary for if they want to die, then they had  better do it and decrease the surplus population.

I'm left alone for the remainder of the night thank goodness, and my rest is peaceful. On waking I'm refreshed for all is well with my world. Bless us everyone.