I find it particularly interesting that these two articles, both appearing in The Guardian were published this week within a couple of days of each other:


Author Kio Stark’s new book When Strangers Meet: How People You Don’t Know Can Transform You is about her seven-year personal study of her interactions with strangers in New York City. She believes that reaching across the gulf of silence that normally stands between ourselves and the people we encounter on a daily basis is not just essential, but transformative.
. . .  Stark said: “When you talk to strangers, you’re making beautiful interruptions into the expected narrative of your daily life – and theirs.”
https://www.theguardian.com/commentisfree/2016/sep/27/when-strangers-meet-life-is-richer-kio-stark


Badges from mystery source encouraging passengers to talk elicit calls for ‘do not disturb’ signs – but not everyone is against. . .

I have lots I want to write about at the moment. In fact I have several part completed pieces on such topics as hope, fear and (party) politics; the non/motherhood debate and its particular twist this summer; various isms (not least ageism here); media bias and so on and so on. But last night I slept better than I have for many nights, today the sun is shining and I had scrambled egg sandwiches for lunch (my comfort food of choice). I feel sure the significant discomfort and distress (see previous post) I've felt over the past weeks will return but for now I'm feeling a little positivity and have decided to make the most of it. Hence this blog entry on the importance, and joy, of talk and other forms of communication.

First a couple of personal tube tales. I lived in Wimbledon and Walthamstow for a few years in my twenties and for some of this time travelled to and from work on the London underground, I remember these journeys as solitary ones. I'd meet the same people day in, day out but never went beyond a nod or a smile with anyone. One memorable morning I was sent home from work feeling poorly and whilst on the journey I began to feel much worse. Knowing I was going to throw up I left the tube train at a stop before mine and made my way as close to the end of the platform as I could before losing much of my stomach contents. Unfortunately for me there was a blockage on the line and instead of promptly leaving the train  remained in the station for several minutes during which, after extensive vomiting, I leaned against the wall and shivered. No one, either on the platform or from the tube train, came to help me. I got home eventually and recovered in bed over a couple of days. I travel to and through London a lot at the moment for various work commitments so once again I'm a regular London underground user. A few months ago whilst approaching a short set of stairs at Kings Cross complete with pack-pack and small wheelie case I was approached by a man saying 'Hi, let me carry your case'. I smiled and said 'It's OK thanks, I can manage'. 'No, let me', he replied 'It will be my good deed for the day.' I gave him my bag. I hope he felt pleased with our encounter, I did.

Although I have spent all my working life in people-focused jobs, much of which involves me standing up in front of people and talking I am in fact rather shy. I find conferences where I know no one scary and when teaching big groups find the first encounters hard going. I prefer evenings with friends in small groups to big parties.  I'm not alone I know.  And yet, I enjoy brief communications with  acquaintances and strangers. One of the many good things about moving back (a few years ago) to the small seaside town I grew up in is how hard it is to walk along the main street or to the beach without meeting someone I'm acquainted with. Maybe an old friend from school, or a more recent acquaintance to share a smile, an hello or an exchange about the weather with. I have a couple of very good friends who always stop to talk to dogs and their owners. I too like dogs (and cats) myself and will sometimes stop to stroke one whilst out. I'm much more likely though, as one friend pointed out to me recently, to chat to children, on the train, in a shop or a cafe. I also quite regularly compliment people - usually women, sometimes men - on something they are wearing and experience pleasure when strangers do the same to me.

Much of our communication takes place online nowadays and this of course has both positive and negative consequences which has been starkly highlighted during this summer's Labour leadership election. But, but, my good mood in mind, I'm trying to focus more on the positive here. In the last few years I have become concerned in my academic work in how to present research and scholarly messages in different ways (beyond the traditional academic article or report). So, I am interested in, and attempt to contribute to, the creative telling of academic 'findings' in different ways - through songs, fiction, theatre - and in different outlets - in blogs and non-academic publications. The numerous songs, poems, videos and blog entries written and performed in support of Jeremy Corbyn, his team and his policies (put any of these words into Google or YouTube or see this for an example https://www.youtube.com/user/chunkymark) demonstrates that creativity and politics clearly go together also.

And yet, it's still important to talk, even those of us who feel a little shy on occasion. As many, many commentators have said (and written), including over the last few weeks, if the dominant messages we receive are not as we would wish, are not complete or accurate, it is the responsibility of all of us to join with others to challenge these. And not just on paper or online but face-to-face out and about in the world. With this in mind members of my local Labour Party CLP, as part of Labour's Campaign Day: Education not Segregation,  are frequenting  a stall in the centre of town tomorrow. As a fairly new member of the LP I've not been able to attend a meeting as yet (not least due to the summer suspension of meetings) so I'm planning to go along and say 'hello'.

With thanks and apologies to David Bowie I'd like to end this post with a song - just substitute 'dance' with 'talk' and off you go. 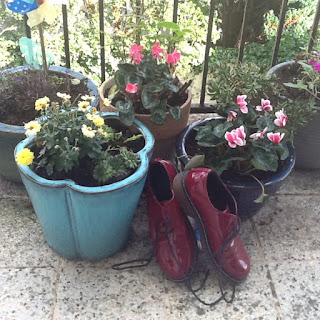