This is not the first time I have written about homelessness (and related issues) on this Blog and elsewhere. For example on the 5th November 2017, as part of a short story challenge, I wrote the following:

Remember, remember when it was only kids, proudly displaying a man made of paper, dressed in dad’s old clothes, that people gave money to on the streets. That was before an increased awareness of stranger danger; the favouring of the North America fancy dress accompanied candy-fest over bonfires and apple bobbing; and a more nuanced understanding of the gunpowder treason and plot.

I was one such child.

My sister was lauded by all as ‘the artistic one’ so it was she who was responsible for the PENNY FOR THE GUY sign, decorated with colourful drawings of firecrackers, Catherine wheels and fountains. Susan also had the job of painting Guy’s face. But, I could stuff as well as the next boy and I made sure that no newspapers were thrown out for weeks before. Complete with our effigy we’d walk into town, via the seafront, every afternoon once school was over and early on Saturday morning, for two weeks prior to bonfire night. We generally did pretty well and we always had enough to buy sparklers and some toffee to supplement the box of fireworks and the potatoes to bake our parents brought to the party.

Remember, remember the war that, many argue, won a prime minister and her government a further term or two in power. But less of the consequences of that and more of long-term personal impacts of conflict. Once abandoned HMS Sheffield continued to burn for six days until it sank. Twenty crew members were lost and more than that number suffered serious physical injuries. Others, lots of others, from that battle, from all the battles during the conflict, were left with wounds not visible to the naked eye. Post-traumatic stress disorder; just one of the legacies of military activity for more men and women than we like to admit.

I was and I am one such man.

My mental scars influenced by life from then on; my choice to leave the service, my inability to hold down a job, my increasing awkwardness in both intimate and acquaintance relationships. I felt such guilt you see. Guilt for my survival. Guilt for the opportunities which ironically I was ultimately unable to make the best of. Finding joy in nothing and in nobody I retreated from the individuals and the things I once loved. Even now when I experience a little pleasure from the kindness of strangers, an occasional hot meal, an overheard snatch of once beloved music I push it away; unworthy as I feel that I am.

Remember, remember when you next pass by a homeless person on the streets or in the park that you too, or someone you cherish, might be one experience, one crisis, one pay packet away from a life with no security and little comfort. Remember too that an estimated one in ten rough sleepers are thought to be from a service background.

This week, following the death of a homeless man in Westminster, there has been a plethora of articles in the mainstream and alternative media focusing on this issue. In one such article Steve Topple writes:

This is Tory Britain, where it’s not just homeless people who are dying. It’s a country where a study found that the government’s Work Capability Assessment (WCA) was linked to an “additional” 590 people taking their own lives. We live in a country where people are dying while they wait for the government to give them the support they’re entitled to. And it’s a country where the government openly admits that, between December 2011 and February 2014, 90 people a month died after being told by the Department for Work and Pensions (DWP) they were “fit for work”.
This is Tory Britain, where elderly people are wandering the streets, freezing and alone, because they can’t afford to heat their homes. It’s where an estimated 9,000 people died in 2014/15 because of fuel poverty; where an estimated 120,000 people have needlessly died since the Conservatives came to power. One expert called it “economic murder”. https://www.thecanary.co/opinion/2018/02/14/homeless-man-just-died-outside-parliament-government-may-well-policy-kill-citizens/

In this week’s The Big Issue there is an article focusing on anti-homeless measures in Bournemouth, Bristol, London, Manchester, Leeds and elsewhere. (It’s also happening in my home town of Falmouth, apparently because homelessness is often ‘a lifestyle choice’ and ‘The attraction of the homeless to the area is having a detrimental effect on the perception of Falmouth from both locals and visitors.’ https://www.thecanary.co/uk/2018/02/16/homeless-man-just-jailed-good-part-dangerous-trend/).  In some of these places public outrage (often mobilised, at least in part, via social media) has led to some back-tracking. In Bournemouth the bars on benches have been removed and a statement issued by the local council. Thus:

Homelessness prevention and support is a significant and growing issue nationally and the council continues to maintain that as a society we should be aiming far higher than a bench for people to sleep on. (Geraghty, L. ‘Hostile takeover’ The Big Issue 12-18th February 2018, pp8-9.


I’m sure it can’t only be me who interprets this as a case of: 'if we can’t see the problem then we can pretend it doesn’t exist'. Recently in the run up to the wedding of Prince Harry and Meghan Markle on the 19th May in St George’s chapel at Windsor Castle the Royal Borough of Windsor and Maidenhead has been embroiled in its own related row. But although it appears that this council has also bowed to pressure to ‘defer’ (notice not abandon) a report of rough sleeping which could lead to rough sleepers being fined http://www.bbc.co.uk/news/uk-england-berkshire-43060022 it remains unclear as to whether or not the council is still ‘demanding’ that police clear the area of homeless people before the wedding. The justification for this is horrifically familiar:

…the council has evidence that “a large number of adults that are begging in Windsor are not in fact homeless, and if they are homeless they are choosing to reject all support services ... In the case of homelessness amongst this group, it is therefore a voluntary choice.”

In response to this Jon Sparkes, the chief executive of the charity Crisis, said:

“People shouldn’t be targeted simply for sleeping on the street. In fact, homeless people are far more likely to be victims of crime than perpetrators, and rough sleepers are 17 times more likely to be victims of violence compared to the general public. They deserve better than to be treated as criminals simply because they have nowhere to live.” https://www.theguardian.com/society/2018/jan/03/windsor-council-calls-removal-homeless-people-before-royal-wedding

Despite this as Frea Lockley reports:

A homeless man from Bristol has been jailed for six months because he broke an injunction to stop him begging. And this is just the tip of the iceberg. Across the country, as homelessness rises, councils and police are criminalising and blaming - rather than supporting - homeless people...

Hill is the eight person to be jailed "for similar reasons". But David Cowan, a professor of Law and Policy at Bristol University said the council was "criminalising begging".

"It is just stupid. The issues here are not criminal, they are structural... There is no precise law against begging. What is happening here is they are criminalising begging through injunction process." https://www.thecanary.co/uk/2018/02/16/homeless-man-just-jailed-good-part-dangerous-trend/

In response to the death of the Portuguese man – a former model and lover of singing and yoga – who died in Westminster a few days ago -  Jeremy Corbyn, who was away from London for some of the week, tweeted on Wednesday evening:

@jeremycorbyn I've just been told about the death of a rough sleeper right by the entrance to Parliament. The powerful can't carry on walking by on the other side while people don't have a home to call their own. It's time all MPs took up this moral challenge and properly housed everyone. 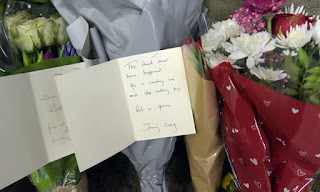 The following day there were flowers and cards both from Mr Corbyn and from Labour Party staff. The message on the Labour leader’s card reads:

This should never have happened.
As a country we must stop walking by.
Rest in peace

Inevitably – despite his continued concerns over homelessness and housing (see an excerpt from an interview with John Bishop for an example https://www.youtube.com/watch?v=TEWgFUq3q2w_) - there has been some negative responses to this including those who accuse Corbyn of ‘words not deeds’ and of virtual signalling’ (the action or practice of publicly expressing opinions or sentiments intended to demonstrate one's good character or the moral correctness of one's position on a particular issue.) There’s also, again sadly inevitably, responses along the line of ‘there’s help if people need it and can be bothered to access it’ and yet again ‘homelessness is a lifestyle choice’. Yet more evidence that those who accuse others of ‘politicising’ social issues do not understand that a) everything, absolutely everything (physical and mental health, dis/ability, education, family life, homelessness and housing, leisure choices and opportunities, animal welfare, ethnicity, gender, sexuality etc., etc., etc., and the rest, and so on and so forth ….) IS political and b) they are in fact doing what they are raging against (i.e. politicising the issue). It also, of course, denies the context and the structural reasons for homeless, poverty and other in/equalities.

I’ve been in London this week. It was cold. As a woman a little older than others of a certain age (if you get my drift) my body temperature is somewhat warmer than it used to be. But I, in my two jumpers, coat, hat, gloves and big scarf was very cold on several occasions. And yet all the meetings I had took place in warm offices or cafes and each night I slept in a warm (ironically a little too warm) hotel room. I can only imagine how difficult it must be to keep dry, let alone warm and healthy when living on the streets. And we know that:

People who are homeless often face severe health problems and early deaths – on average 30 years younger than people who are housed. Deaths are often not predicted, so not planned for, and are often perceived as unexpected and unanticipated. As a result they are often crisis led and occur in hospital. Advance planning, and the involvement of palliative care services is rare. [added emphasis]  http://www.pathway.org.uk/services/end-life-care-homelessness/

I have a very young friend with a wonderfully, infectious sense of humour who likes to mimic her grandfather’s singing of ‘Baby it’s cold outside’ in the deepest voice she can manage. This week, I can tell baby that it has been VERY, VERY cold outside. I’m home now and it’s COLD here too and I have the heating on. Only just over two weeks into February it frightens me to think of how many more people who are homeless or experiencing fuel poverty will die unnecessarily before the winter is done.