As part of a November Short Story writing challenge - 30 short stories in 30 days - I have written a number of political stories. I have already posted some on this blog. See the following links if you would like to read them. Topics cover the NHS, homelessness, austerity in general and more:

Here are another three.

The first I wrote following the behaviour of some members of the government whilst the Leader of the Opposition was replying to Hammond's November 2017 Budget. 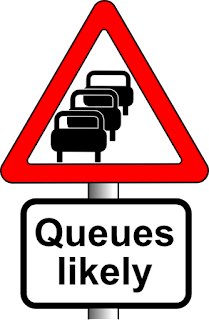 What surprises me the most is how really, really cold, absolutely freezing in fact, it is down here. Everyone knows that it’s supposed to be hot. Unbearably hot.

I’m not a fool and was well aware of the likelihood that this would be my final destination. I packed appropriately and, being a cold blooded being, I was actually looking forward to feeling comfortably warm for a change. But now I find that in fact what I need, and haven’t got, is a thick winter coat and a scarf.

Looking around me it’s clear there are more surprises each of which make me shudder. Without going into detail it’s seems that being in hell is indeed an individual experience. Tailored to the hates and fears of each individual inhabitant it’s Room 101 on a larger scale.

I see others I know for bad (or maybe not so bad depending on your perspective) behaviour grows and festers and it’s rare for infected apples to remain in the singular. Everyone I see is experiencing their own specific underworld which I can observe but not participate in should it result in a more favourable experience for me. There are overlaps of course. I don’t regret my life. It was fun whilst it lasted but already I can tell that the eternal reflection I have just begun will become wearisome soon enough. That and the braying.

I spent my political life as a brayer. After all shouting down the opposition is what it’s all about - for who cares that austerity continues to more negatively impact on the lives of those already most disadvantaged; who cares if one’s party has failed every debt and deficit target it has set itself; who cares that there are four million people on the NHS waiting list and that overworked healthcare professionals are preparing themselves for more crisis to come; who cares that real wages are lower now than they were in 2010; who cares about no commitment to sprinklers in high rise tower blocks; who cares …  - as long as one slings as many insults as possible at those across the dispatch box that’s all that matters.

For now it seems I’m stuck, not in a pleasantly warm inferno, but rather in a fridge like pit surrounded by brayers to which I am unable to respond. My head hurts already. But, what the hell, if you’ll pardon the pun, for at least I’ve got a whole heap of money that I squirrelled away in a paradise tax haven. Ohh….

****
The prompt for the second story was (amongst other things) an advert in the Evening Standard earlier this week asking for donations to ensure that children in London don't go hungry see https://www.standard.co.uk/help-a-hungry-child/help-feed-londons-hungry-children-our-christmas-appeal-a3703711.html

THE PEOPLE WHO LIVE IN TREES 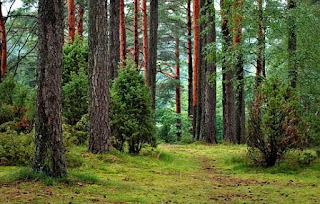 The world is divided it seems between those who live in trees and those who do not.

Hidden in the middle of a forest in a place that most of us don’t know about there are some magical trees. The trees are strong and beautiful. Their roots are firm and well nourished. Their trunks solid and eminently huggable. The branches of the trees are full of golden leaves that never fall and fruit that never goes mouldy. Rather the leaves and the crop grows and multiplies so that the value of the trees, and the comfort they provide, increases day on day. Only a few very powerful, and already rich, people live in the trees and thus it is only a small minority that have access to the magical benefits that the golden leaves and fruit provide. This ensures that these individuals are able to keep their power and that their lives are chock-a-block full of the things that they are able to exchange the leaves and the fruit for. Sadly though the magic does not always influence the tree people’s behaviour for the good and so whilst many of them do everything they can to ensure that they have more leaves and fruit than any one person can possible need they tend not to think much about those who have very little.

Away from the forest, in the rest of the world, life is very different. Increasing numbers of those who do not live in the forest of magical trees are struggling to survive. More and more of them are having to decide whether to spend what little they have on food or on heating, on accommodation costs or on clothes. This is true (although some of the tree people do everything they can to deny it) of many who are working, including nurses and police-officers as well as those who have jobs in shops and offices and elsewhere.  Sometimes the problem gets so bad that the people who do not live in trees have to miss meals or rely on the help of others in order to feed themselves and their children. Some even lose their homes and end up living in cramped and unsafe buildings or have to make their home on the streets.

The solution of course is obvious. The people who live in trees merely need to tell everyone else where the forest is so that the trees can be shaken for the good of all, so that the magic can be shared. Sadly this seems to be too complicated a concept for the people who live in trees who instead spend their time trying to persuade the non-tree dwellers who have a bit more than others to give to those who have less.

This means that the divide between those who live in trees and those who do not is getting bigger, and bigger and bigger the country and the world over. It can’t go on.

****
The need for a critical view on the mainstream media is more and more obvious. This was in my mind when I wrote this third story. 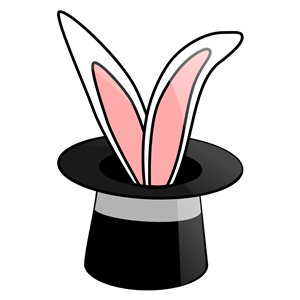 Mr Flopsie is content with his lot. He lives a mostly comfortable and largely stress-free life in the bottom of The Grand Magifico’s top hat. Along with his doe Barbara – funny name for a rabbit but she likes it well enough – and their thirty-eight children Mr Flopsie frolics all the live long day in the green fields and burrows concealed within the silk topper. With few predators to bother him and enough grass, hay, fruit, vegetables (he especially likes spring cabbage) and fresh water, which an unseen hand regularly delivers, life, he believes, is good enough.

And what of the price for this, if not luxurious, at least tolerable, incarceration? Once a day, twice on Wednesday’s and Saturday’s, with a reprieve on Sunday, Mr Flopise is pulled from the hat by his ears to a chorus of ‘oohs’ and ‘ahhs’ and loud applause from an audience of girls and boys, and their parents and friends, in various theatres across the UK. Despite some who might argue otherwise our hero is indeed a sentient creature but The Grand Magifico is a fairly gentle jailor and being the subject of almost daily manhandling and group voyeurism seems to Mr Flopise a fair enough price to pay for the continued wellbeing of himself and his family.

At the end of each show and when left alone Mr Flopsie ventures out of the hat on his own accord to explore the wider surroundings. More often than not this is The Grand Magifico’s dressing room, now and then the theatre stalls (a treat which generally results in strange but interesting additions to his diet). These trips are important as they enable the fluffy rodent to further his education. As a travelling show-person the magician is provided with different reading material wherever he goes depending on the political inclinations of the theatre owners, cleaners and handy-people. This makes for a confusing learning experience for Mr Flopsie for no sooner has he has read and digested (often literally) a newspaper and made his mind up about the important issues of the day he will have his beliefs and opinions challenged by a different publication. Despite wanting to discuss the knowledge he acquires with Barbara and the kits Mr Flopsie soon realises that the often contradictory messages he is reading not only leave him confused but also make him seem rather stupid if he repeats these all as fact.The most distressing competing stories are those that focus on people who in some ways are different to the expected norm and / or disadvantaged in some way or another. In a number of the papers he reads these individuals are blamed for, it seems to the increasingly confused rabbit, all the problems in society, whereas in others their lifestyles and problems are treated with more respect and empathy.

Slowly, slowly Mr Flopsie begins to work out that rather than believing any story at face value he needs to collect as much information from as many sources as possible before he comes to a conclusion. He learns that just because a publication is popular doesn’t necessarily mean that it is the most trustworthy and the day that someone leaves the computer on before going home opens his eyes to alternative sources of information. The development of Mr Flopsie’s critical thinking skills, and his ability to, at least some of the time, identify fake news, has additional and broader impacts. As he starts to understand the significance of media bias and political spin Mr Flopise also begins to re-evaluate his own life choices and chances. Chewing on his night-time carrot late one Friday night he wonders if the life he has been persuaded is all that a rabbit of his standing and status can expect and hope for is indeed the limit of his opportunities.

A little late for the matinee performance the following day The (actually not so) Great Magifico forgets to check his box of tricks before going on stage. He is left then with a fair amount of egg on his face when he reaches deep into his top hat only to extract with a flourish a rather wilted cabbage.
Posted by arwenackcerebrals at 02:21