'Whose NHS?' 'Our NHS' | A Personal Response to #OurNHS, #OurNHSDemo, #NHSMarch 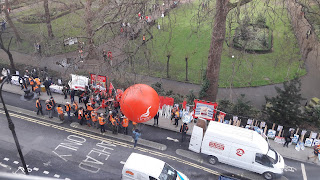 It's 2 am. I have jet lag. On Thursday/Friday I travelled overnight from Vancouver to London, my trip to Canada prompted by a family bereavement. Friday night I spent in London in a hotel in Tavistock Square and before catching the train home to Cornwall I participated in the #NHSMarch from Tavistock Square to Parliament Square. Last night, as tonight, I was awake until the early hours and this was the view from my window when I woke at 10.15 am on Saturday; preparations for the day had begun. 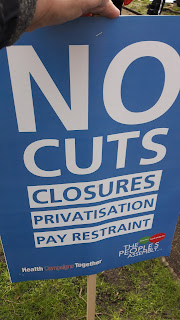 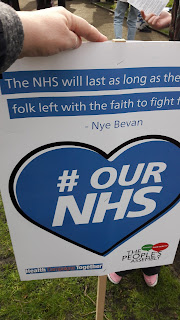 After a bit of breakfast in a nearby cafe I picked up a placard and joined the growing crowd. I joined in the chants - 'Whose NHS? Our NHS', 'No ifs, No buts, No NHS cuts', and the like - and exchanged smiles and pleasantries with the people around me. The march was an emotional event for me as for many others. I could only agree when I heard a man walking behind me say 'It's great to be surrounded by so many people who obviously feel the same way as I do'. But I couldn't help but feel distressed and horrified that such a demonstration is needed.

By the time I reached Westminster it was nearly 3 pm and worried about missing the last train home I left soon after, sadly missing most of the speeches which I hope to catch up with later today. There were still people pouring into the square as I left. Once on the tube I was confident that I had time to go back to the hotel to pick up my bags and get to Paddington with time to spare.  However, for some reason all the Circle Line trains were stopping at Edgeware Road and exiting the station I decided that a taxi might be my safest bet. I hailed one quickly only to be asked to give it up by a young man assisting an elderly relative. This I did and despite a bit of an axious wait I found another cab and reached Paddington with enough time to get a coffee (having not had anything to drink since morning). My coffee poured there was a bit of confusion with the till and the server turner to me, smiled and said: 'Have it on the house madam'. After a day of mixed emotions I was warmed by this kindness. 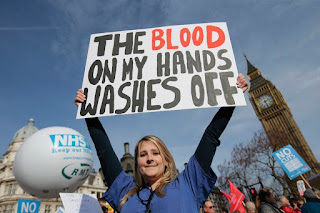 I spent much of the journey reading tweets, Facebook posts and articles about the #NHSMarch. I enjoyed the images, clips and personal stories (including some of the sister demonstration in Cornwall) and was horrified, but sadly not surprised, by the deflation of the numbers marching - from hundreds of thousand to tens of thousands - and the attempt at distraction from the event by some (political and media) commentators. In reaction to the 'don't (just) get angry, get active' call and action there has already been some 'what's the point?/there is no point in protest' response. It was one such retort that brought me close to tears on my long journey home. I have two twitter accounts (long story) and on one of them (@gletherby) I came across a tweet from Owen Smith MP in reply to a query about why he had not attended the demonstration alongside other Labour MPs including Jeremy Corbyn and John McDonnell. Smith's reply was as follows:

Is that how we save it then? With a march? I always thought it was better to win elections and then fund it properly.

There had already been replies suggesting a) that party unity is needed in order to win elections b) that challenge to government is the job of the opposition, and c) that such a response is dismissive and condescending to those that had taken to the streets or supported the event in other ways. Agreeing with all of this I added:

Still on my way home having left #NHSMarch at 3pm. Appalled and offended by this remark OSMP.

Which I further clarified a little later:

Left #OurNHSDemo @ 3pm. Should be home 10.30. Appalled and offended by this remark OSMP.

One of the most powerful aspects of Saturday's demonstration was the camaraderie between all those who attended whether event organiser, politician, union member, healthcare professional, celebrity, journalist, young and not so young and so on and so on. I wish I'd been able to get my phone out quick enough to take a photo of the police officer taking a photo of and for a group of smiling protesters holding their placards high.

Of course we all have multiple identities and 'get involved' for multiple reasons. In my 58 years as girl and woman I have been in hospital overnight, or longer, three times; I have had two minor operations; broken one bone; experienced one miscarriage; had several lots of stitches and visited or spoken with GPs, practice nurses, dentists and pharmacists innumerable other times. As a daughter, a partner, a friend I have been supported by healthcare professionals whilst I was caring for others. As a nursery nurse I worked in a busy postnatal ward in 1979/80. As a sociologist who is interested in (amongst other things) health and illhealth I have, and continue to, teach, supervise and examine (at undergraduate and postgraduate levels) nurses, midwives, occupational therapists, doctors and others. As a researcher I have studied the experience of patients, pregnant women and new parents and healthcare professionals. To be walking with so many others, each with their own experience of and with the NHS, was a privilege. The support for the event - on the streets and in spirit - was a clear demonstration that it is indeed #OurNHS and that in response to 'They say cut back' we are entitled to reply 'We say fight back'.

I have had lots of response to my two tweets including one supportive one that suggested that the real focus should be on the Tories. My reply to this:

Agree - we should ALL be focusing on the Tories.